It was quite a nice spring morning when I went for my run today though later it clouded over. The usual birds on the floods (2 LITTLE RINGED PLOVER, 1 RUFF & the usual ducks) were made more interesting when I spotted this chap over near the Burgess Field gate. 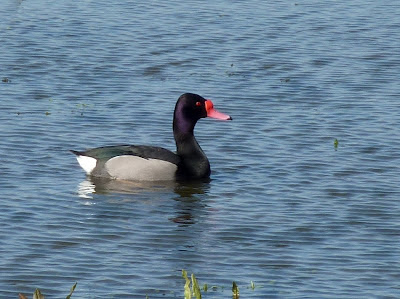 Thanks to an OxonBirds posting by "crossleymh52" who spotted the bird up at Wolvercote, I can tell you that it is a ROSY-BILLED POCHARD, a native South American species. I wish that I could tell you that it has somehow battled it's way over here from that continent but unfortunately it's more likely to have escaped from Mr. Branson's Kidlington wildfowl collection. Still it's a very smart looking bird, looking like a dark grey tufted duck with a shelduck's beak stuck on the front. I must confess that when I first saw it I did think that it might be some kind of hideous hybrid though it would make for a rather unlikely combination now that I think about it!
I spent some time in Burgess Field checking out the warblers and was very pleased to find my first WILLOW WARBLER of the year on the Patch (though Sydney Penner spotted the first one about a week ago). In addition there were quite a few singing blackcaps and chiffchaffs. I also heard a swallow and a martin sp. go over though I didn't see either.
I am also pleased to be able to report a goldcrest tick for the patch finally as Donald Degenhardt reported a pair in St. Peter's churchyard in Wolvercote over the weekend.