At last a rain free day! In fact it was sunny with just a modest breeze so I chose to go on the first run around the patch for some time. First stop was the Trap Grounds which were extremely flooded though I failed to find any reed warblers there yet. Next stop was Burgess Field where the first WHITETHROAT of the year was found though still no grasshopper or garden warblers yet. Finally to the floods which were now absolutely huge, extending half way up Burgess Field and the river had burst its banks by the boats so that I had to wade through knee-high water to get all the way round. Finally things do seem to be picking up on the migrant front and along the narrow strip of grass between the river and the floods I found 4 WHEATEAR (with at least one looking like a possible Greenland sub-species), 1 COMMON SANDPIPER and 1 WHIMBREL (presumably Sydney Penner's bird from yesterday). To add to this welcome increase in Meadow bird sightings Phil Chapman had a couple of summer plumage adult LITTLE GULLS (a Patch Year Tick) this afternoon, hawking over the floods. Finally this evening I found 8 SWIFTS (the first of the year on the Patch) soaring over my house which were a most welcome sight.


All in all, returning migrants have been remarkably late this year: whilst last year the first swifts were on the 26th April (so not much difference there), the first whitethroat was on the 8th April - a huge difference. In fact last year the Patch Year List was on 118 on this date so despite getting three ticks today we're still some 16 species behind. 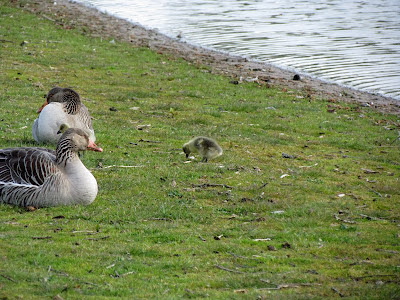 There are quite a few goslings about now