I was lucky to catch an extended dry spell when I went out to the Meadow late afternoon and it turned out to be quite a productive session. To start with there were a couple of RINGED PLOVER and a couple of DUNLIN, marking the start of the Meadow spring passage for these two species which often seem to travel together. The two SHELDUCK and one of the OYSTERCATCHERS were still about and there was a single COMMON TERN in with the black-headed gulls though it didn't linger. But the most interest was generated on the surrounding grass, with four very smart WHITE WAGTAILS and two WHEATEARS adding some interest to the visit. In fact these are the first wheatears of the year for the Meadow: we always end up getting this species but there are usually only a few sightings over the course of the year so it's always when one actually sees them. There were loads of hirundines around hawking low over the river and the grass. 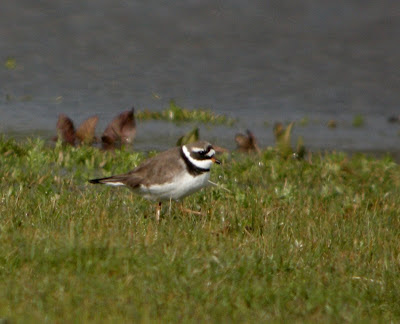 One of the two ringed plover