Well, that's the end of January and it's been a rather strange one. First it was huge floods, then it was snow everywhere and now we're back to huge floods. It's always really hard to bird the Meadow when the floods are as big as they are at present (the waters are well past the north end of Burgess Field): you either have to peer through the trees or squint through your scope from the river tow path. Yesterday I chose the latter option where at least I could get a decent idea of what ducks were around: as well as the usual Teal, Wigeon and a few Shoveler there were a couple of Red-head GOOSANDER, at least 21 PINTAIL and a couple of GADWALL which were Patch Year Ticks. There have been five REDSHANK roosting on the logs opposite the Poplar Trees the last couple of times I've visited - it's nice to have some waders about. The gull roost has been rather paltry the last couple of evenings though I've only made a half-hearted attempt with it and not really stayed until dusk.


Apart from that I've visited the Trap Grounds a couple of times where a couple of REDPOLLS and a TREE CREEPER have been the best that I could turn up. I also had a STOCK DOVER fly over the river this week. The BARNACLE GOOSE flock is still about, hanging out at King's Lock for the last few days.


We've ended the first month with the Year List on 85. The obvious things that we're still missing include Black-tailed Godwit and Syklark though with the floods as they are at present we may well also be able to find Tufted Duck and Pochard. Once the floods start returning to normal the grilling of the gull roost can get underway where white-wingers are a possibility as well as the regal Caspian gull. Plenty to look for for next month! 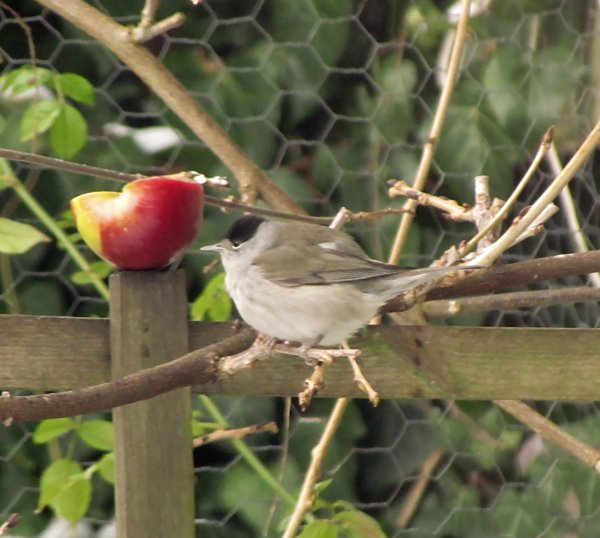 My aggressive Blackcap is still about, keeping all the other small birds out of the garden.