I've been away for a few day (see Pendeen Birding) and my first visit back to the Meadow found the thin sliver of floods pleasantly enlarged. The recent rain has added sufficient water so that at least it has submerged the cattle footprints which were making it so hard to pick out birds along the shoreline. On the bird front the main difference has been the noticeable increase in golden plover with a flock of about 250 present with about 100 lapwing on Thursday though the fact that the floods are still rather small means that the birds are easily flushed so numbers can vary quite a lot. A couple of teal were also hanging about and numbers should increase substantially as the flood waters expand. Plenty of pied wagtails and linnets, with a smattering of meadow pipits and a passage of skylarks still going on overhead. Burgess Field is rather quiet though there were a couple of jays seen near the copse in the middle. 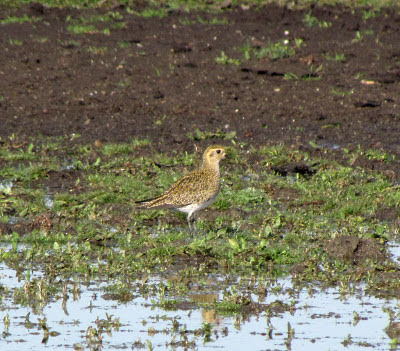 It's wonderful to have these beautiful plovers back on the Meadow
Whilst I was away a WHITE-FRONTED GOOSE was found by Dave Lowe hanging out with the greylag flock though it only stayed for a couple of days. There are no escapee white-fronts around that I know of and I have no reason to doubt the credentials of this bird which will go down as a year tick for the patch. Another patch year tick was provided by Steve Goddard who finally had a MARSH TIT in his garden in Wolvercote. Apparently they're normally fairly common visitors but this was the first one that he'd had all year. 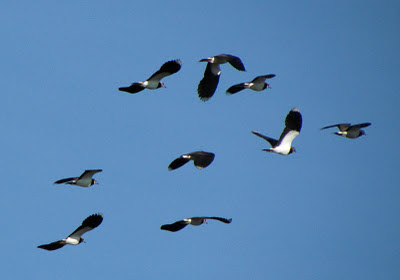 Lapwings in flight
In amongst the black-headed gulls on Thursday were a lesser black-backed and a common gull. With the clocks going back now I might start checking out the Meadow to see if we're getting much of a gull roost yet.
No comments:

There's still not very much to report, hence the long delay since my previous entry. There has been a noticeable change in the weather over the last couple of weeks with the Indian summer giving way to more seasonal weather again. There have been the first signs of autumn and winter in amongst the bird life on the Meadow as well: I've seen a few SNIPE around the flood strip and there were some teal hanging out in the vicinity though there's not really enough water to keep them entertained properly. Lapwing and black-headed gulls continue to loiter by the pool and today for the first time there were about 50 GOLDEN PLOVER wheeling around before settling near Stint Corner. It's great to have this lovely species back again on the Meadow and I always associate the autumn period with their wonderful overhead wheeling flocks as well as searching through the grounded birds for rarer American cousins. Plenty of meadow pipits, linnets and pied wagtails about and there has been a steady overhead light passage of skylarks over the last couple of weeks. Along the river and the Castle Mill Stream the kingfisher has been seen regularly again. 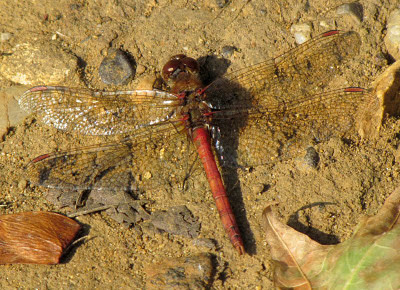 A male common darter enjoying the sunshine
I've only visited Burgess Field once in the last few weeks but was rewarded with a couple of SISKIN flying over and it looks like it might be a good season for this delightful finch this time round. Today in the hedge along the Trap Ground allotments my patient searching was rewarded with a treecreeper, actually my first of the year on the patch though they have been seen by others. This small bit of hedge is often surprisingly productive when looking for birds. 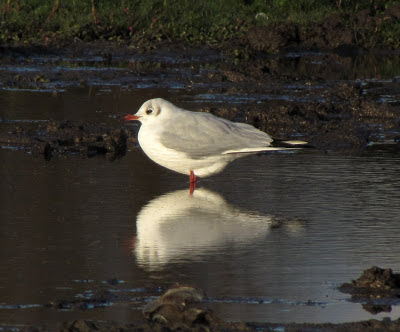 When all the other birds have deserted the flood puddle,
black-headed gulls still keep the faith

A bit of decent rain should expand the pool enough to attract back some ducks and perhaps even some waders as well as the wonderful winter gull roost. It's all a matter of waiting patiently.
No comments:

There's not been much to report since the last entry. I've been away for a week but there have been no reports by anyone else from the Meadow. I went out today to check things out and there is still a thin sliver of flood water though it really needs some water to top it up a bit more. There were 20 lapwings along its edge as well as the usual party of black-headed gulls. Linnet numbers continue to grow and the flock must have been at least 80 strong today. Meadow pipits are also increasing in numbers though the marked decrease in livestock numbers means that there is less of interest to keep any passing yellow wagtails and I didn't see any today. There is a large contingent of canada geese (at least 100) keeping the feral greylags company on the Meadow. A few kingfisher sightings have been reported by Adrian Gray along the river recently. All in all it's a pleasant enough autumnal pastoral scene though not much bird action. 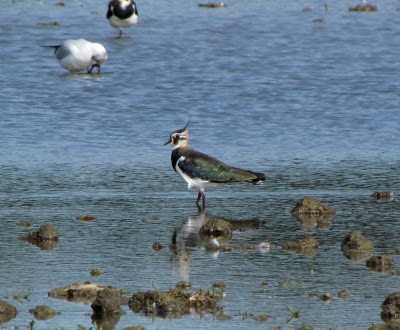