With the passing of the autumn equinox we are now well and truly into autumn. Fortunately the rain has meant that the floods are still well topped up and looking quite healthy but despite this there has been rather a lack of waders on the Meadow this week with just the odd DUNLIN in amongst the ever-increasing golden plover flock worthy of note. Winter duck numbers are increasing too with good numbers of wigeon, teal, shoveler and mallard all settling in nicely and enjoying the floods. There was a good passage of hirundines this morning with house and sand martins and swallows all hawking low over the floods, re-fuelling for their journey south. As we enter October we are coming to the best month for vagrant birds so let's hope that something good turns up soon. 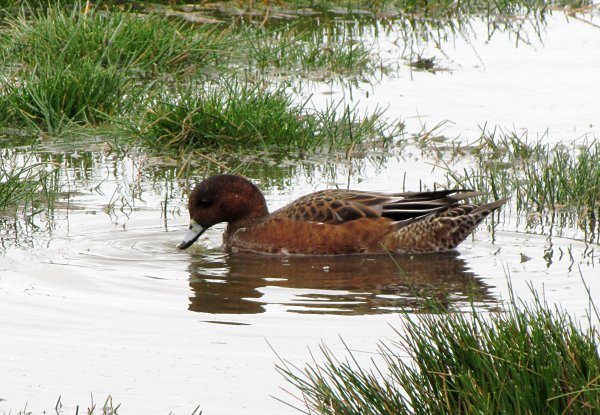 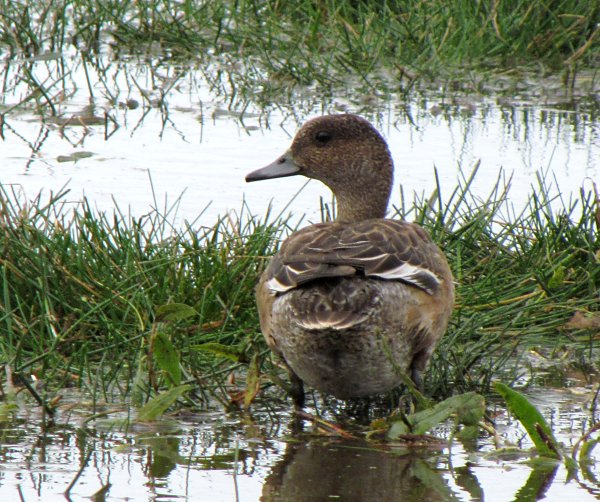 It's nice to have the Wigeon back
No comments:

What a difference a couple of days of rain makes! Last posting I was bemoaning the fact that the floods were all but gone but now they're almost completely covered again, albeit with a rather shallow layer of water. To be honest that rain has come just in time - much more of a delay and the ground would have dried out enough so that any ensuing rain would have soaked away rather than staying. Anyway, I'm pleased to have my patch back for a while at least and with some more rain it should consolidate nicely.


In very windy conditions today there weren't many waders around apart from a single windswept RINGED PLOVER but suddenly the winter ducks are back in force with several dozen WIGEON back, looking as lovely as ever. Teal have been around for several weeks now but for me it's when the wigeon return that the winter ducks are properly in. I just love their piping calls! There were a few SHOVELER in the mix as well.


My only complaint is that the shoreline is very churned up at the moment which makes it rather hard to pick birds out from in the mounds of earth and a skulking wader could easily be missed - not something that you want to do at this time of year! 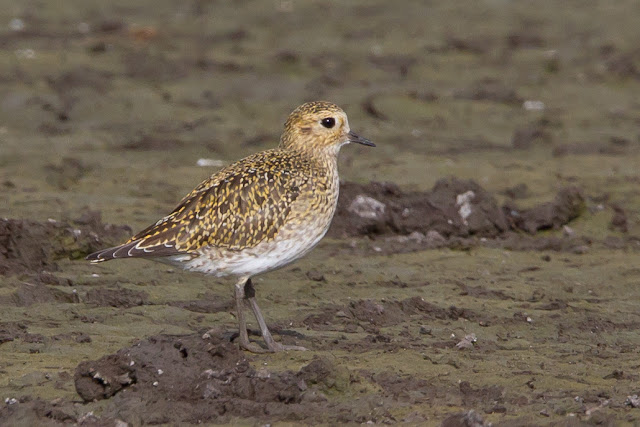 Sadly the floods are all but gone now with a small pond-size area of water left by what used to be Burgess Channel. I've been dutifully checking it out when I'm able but there have only been a few DUNLIN and RINGED PLOVER left to pick over the shoreline. There was a returning WHEATEAR working its way along the Meadow mid week and the RUFF was still about for the first couple of days. There has been a noticeable increase in meadow pipits of late with quite a few of them scouring the mud and grass for morsels along with the pied wagtails. Golden plover numbers continue to increase and the count is well over a hundred birds by now. Along the Castle Mills stream there have been a few Migrant Hawkers and the odd Brown Hawker still. 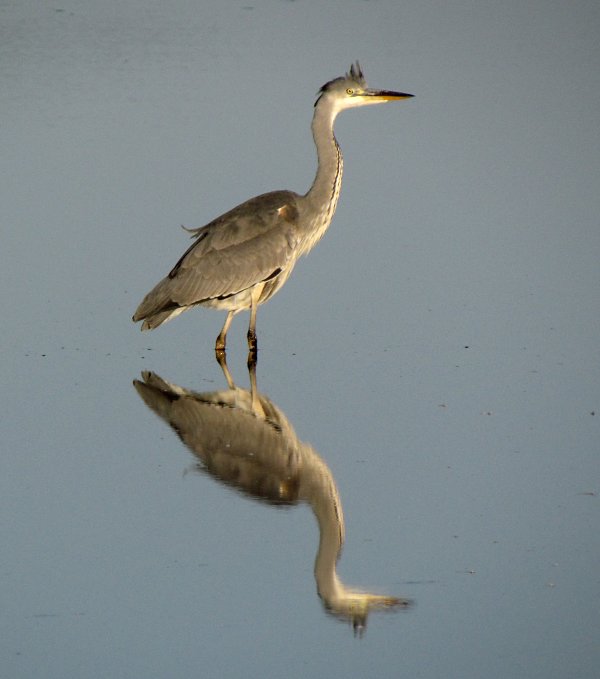 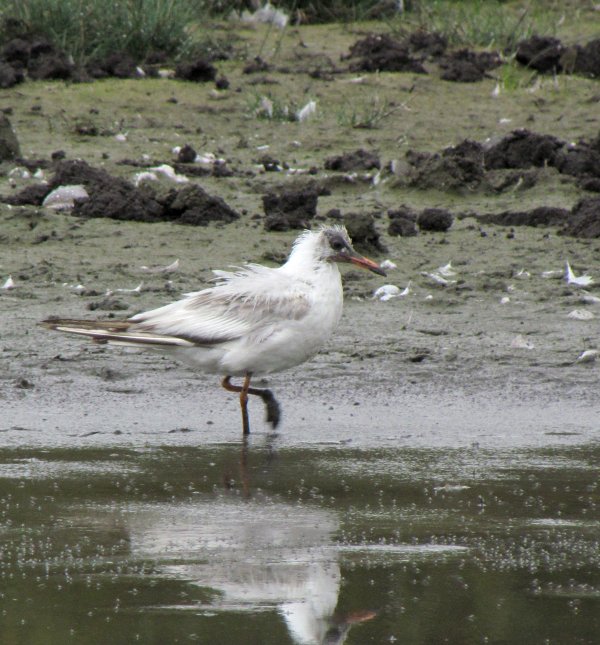 This ugly looking Black-headed Gull has been around the Meadow for about a month now. I think that it lost all it's head feathers which it's slowly growing back. It seems to be able to feed quite happily. 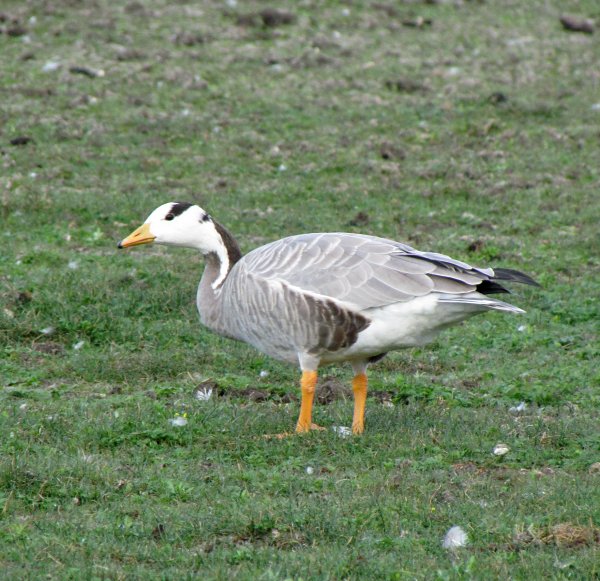 A Bar-head Goose - no doubt blown off course from it's Asian migration - Not!


As you can see I've been reduced to photographing some of the everyday birds on the Meadow. With rain forecast for much of this coming week the floods may well spring back into life - let's hope so!
No comments:

The continuing Indian summer is taking its toll on the floods which are now down to a depressingly small area and without some sustained rain shortly they will in fact dry up altogether. Wader numbers are diminishing as the floods shrink: over the last couple of days there have been a few BLACK-TAILED GODWITS (though these had gone by Saturday), the RUFF still and a handful of RINGED PLOVER and DUNLIN. By way of some compensation there are a few YELLOW WAGTAILS kicking about, golden plover numbers are increasing, and there was a RAVEN soaring over the floods on Saturday but it's really a matter of praying for rain right now. It would be a shame to lose the floods during the peak time for vagrants now.

Along the Castle Mill stream there were quite a few dragonflies this morning with one Brown Hawker, one Common/Ruddy (Cruddy?) Darter and three Migrant Hawkers. Still no Redstart yet. 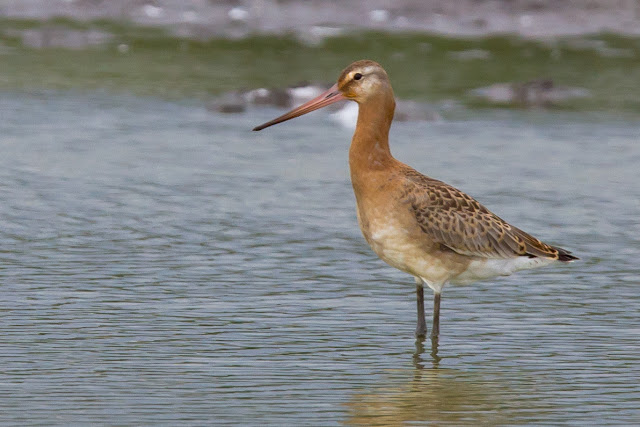 One of the Black-tailed Godwits (c) Roger Wyatt 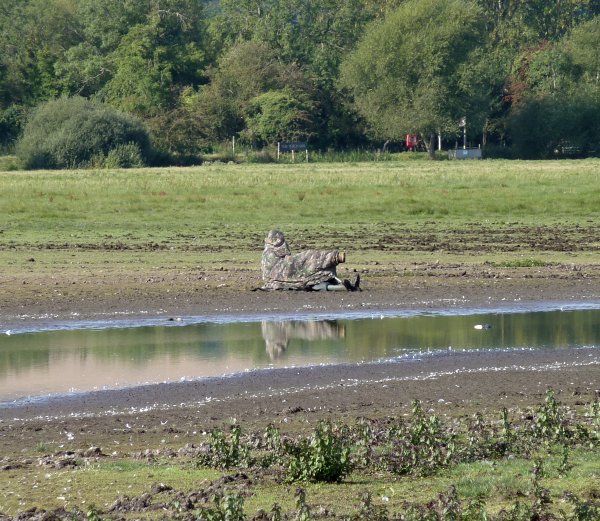 A camouflaged mystery birder waiting for something to come close enough... 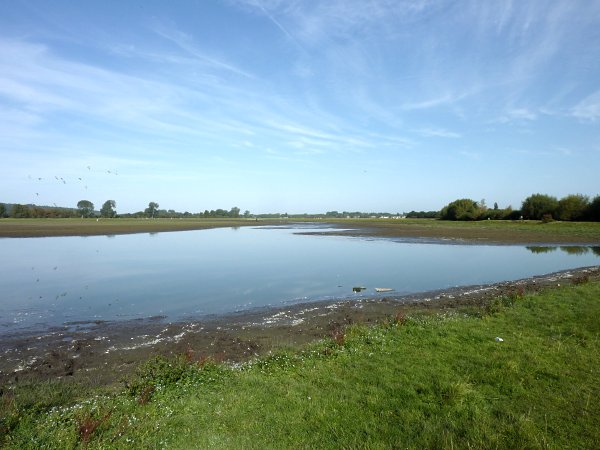 ...there's not much left of the flood water now.
No comments:

Typical! I go out of the county for a day (to Rainham for the Baillon's Crake since you ask - see Gnome's Birding Diary once I've written it up) and a bunch of nice birds turn up on the patch. Nothing too gripping but at least Roger Wyatt was on hand to see what was about. Below is the list of what he found

The previous day there'd been 13 Black-tailed Godwits but the Ruff and Sandpipers were new in. 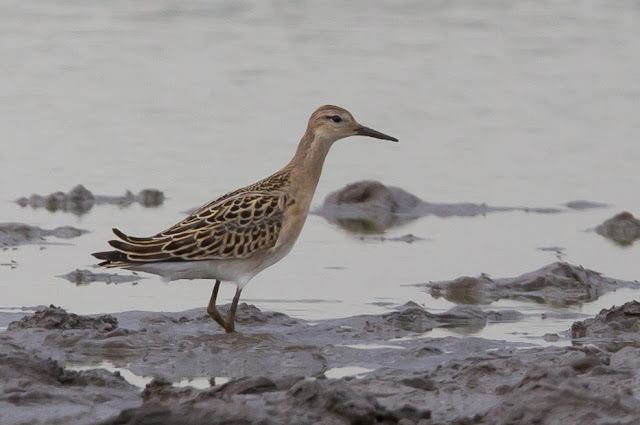 Not much has changed since my last post: the floods are continuing to retreat at a depressing rate though a good period of rain would soon top them up again. On the wader front a flock of 5 BLACK-TAILED GODWITS, rising to seven by Monday was the highlight. Apart from that there were just 3 RINGED PLOVER and 6 DUNLIN worthy of note. There are a few YELLOW WAGTAILS kicking around and the golden plover flock gets larger each time I visit: it's up to over 30 birds now. 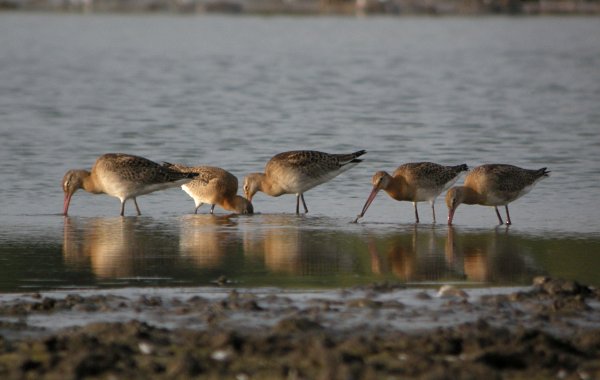 The original flock of five Black-tailed Godwits
No comments:

With the lovely settled "Indian Summer" weather that we've been having this week, the birding has been rather poor as expected. The sunny conditions have been drying out the floods which are looking rather depleted now and in sore need of a top up. Hopefully (from a bird point of view) some more traditional autumn weather will be along shortly. Our plethora of wonderful waders from last month is now a distant memory and we're left scratching around for anything that we can find: there have been 4 RINGED PLOVER and up to 3 DUNLIN on the floods but that's basically been it. Lapwing and golden plover numbers are steadily growing with over 20 of the latter now present, often hunkered down in some of the cattle hoof prints so only their heads are showing. YELLOW WAGTAILS are now starting to appear in increasing numbers in amongst the cattle with at least 4 counted today.


In my garden over the last few days I've noticed quite a few migrant Silver-Y moths nectaring on the buddleia at dusk. By day the same plant is attracting Red Admirals and Small Tortoiseshells and earlier in the week there was a Holly Blue in the garden as well. 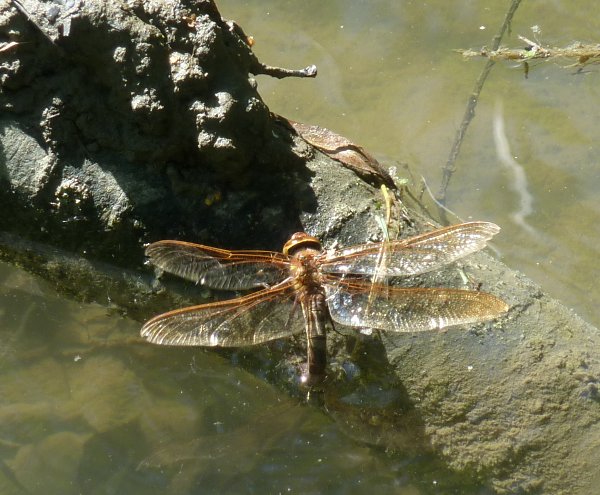 
I went for a run around the patch today to check out the areas other than the floods. The Trap Grounds pond held lots of dragonflies: one Brown Hawker and lots of Common/Ruddy Darters. Burgess Field was almost completely birdless and the only butterflies I saw was a single Small Heath and a couple or Red Admirals. The Castle Mill stream was more interesting with a pair of Brown Hawkers (the female was ovipositing - see photo above) and one or two Migrant Hawkers. The highlight of the trip though was finding a splendid SPOTTED FLYCATCHER (a patch year tick) in the bushes by the stream towards the car park. These increasingly scarce birds don't ever linger on the patch and it's just a matter of luck in coming across one on the spring or autumn passage. Now if only I could find a Redstart on the patch! 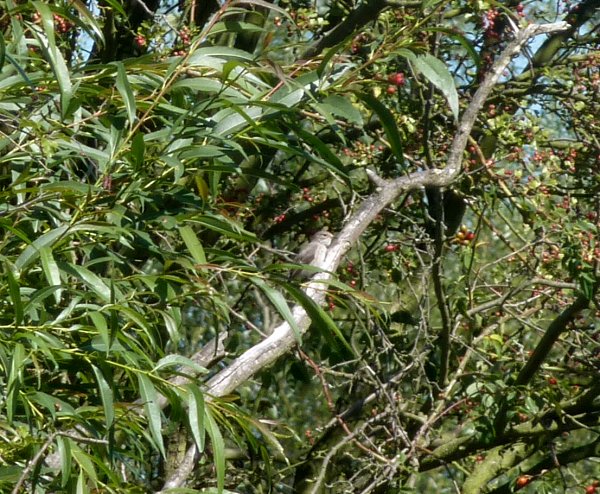 Record shot of the Spotted Flycatcher (I only had my P&S camera with me)
No comments: 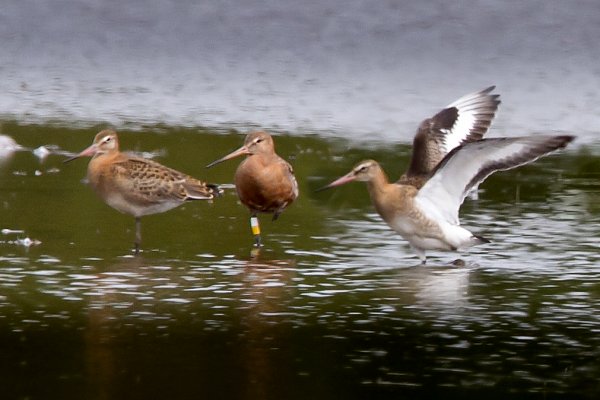 The bird in question showing off some of his rings (c) Roger Wyatt
No comments: