I can't believe that it's been two months since my last blog post! I've been meaning to do one for sometime now but if truth be told there has not been a great deal to blog about. So here is a very general catch up of the last couple of months.

Despite the best efforts of our rather indifferent weather to keep things damp, the heatwave week that we had managed to finish off the floods.We never got anything of particular interested on the flood waters while they were still there apart from various geese that were hanging around. The personal highlight for me was when the flock of 55 feral Snow Geese were spotted by Zhenuan Zang on the remains of the floods one evening. I hurried down and managed to see them - a personal Patch Tick no less! This flock has been lingering around Oxfordshire for a number of years now and certainly looks self sustaining to me (hence the tick) though I think that officially they are not yet recognised as proper Category C birds.

There have been a few other geese species on the Meadow including some of the Barnacle Geese flock which normally only visit us in the winter. Our family of Egyptian Geese, two parents and seven young, are all doing well and are quite grown up now. There has also been a pair of  very pale headed adults on the flood area occasionally.

We did manage to get a few return passage waders: there were one or two Black-tailed Godwits on the fast declining floods and up to 6 Common Sandpipers along the river shore one day. This species seems to like the river shoreline and can be found there from time to time even when there are no flood waters at all.

Two or three Redstarts were found by Mary MacDougall one afternoon in Burgess Field though sadly they didn't linger. We finally got Hobby on the year list when one was seen over the sailing club by Matthew Lloyd.

On the Odonata front the Downy Emerald hung around at the Trap Grounds for a few days but then sadly disappeared - maybe it couldn't find a mate. Apart from that there have been the usual dragonflies and damselflies about at the Trap Grounds but nothing of particular note.

After a very slow start the mothing in my garden has actually been pretty good and for a while it was keeping pace with my record breaking year list tally of last year. Sadly in the rather windy and showery weather of the last couple of weeks this has rather stalled. Still I've been continuing to add new species to the garden list fairly steadily and I am now at over 400 on my list. This is fairly modest by mothing standards but I'm pleased to have reached this milestone for what is a fairly urban garden.

One of the highlights of the summer so far for me has been the wonderful amount of flowers in Burgess Field. The number of flowers very much depends on rainfall and with our wet spring it's bee prolific for them they are everywhere in great profusion! There were several patches of orchids with both Pyramidal and Bee Orchids to be found in Burgess Field. 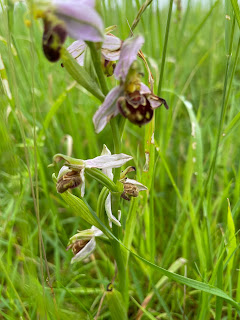 So what can we look forward to for the coming month? Whilst this is normally the start of autumn, without any water we are reduced to looking for things like Redstarts, Flycatchers and Chats in Burgess Field. On the odonata front if the efforts of our colonising Willow Emeralds last year have been successful then we should be starting to see them now at the Trap Grounds - fingers crossed!