It's so nice to have things to blog about once more. After our lean summer and early autumn there are now loads of birds to sift through on a daily basis and usually something of interest. Today's star bird was a classic 1w CASPIAN GULL that gave nice close views (well, as good as you can expect in the half light of dusk). There were lots of large gulls in the roost this evening, it's really starting to come into its own now as we head towards December.

On the wader front there were also 16 DUNLIN looking for all the world like little clockwork toys as they worked their way along the shore line.

Firstly, I should point out that my Yellow-legged Gull from two nights ago turns out actually to be a CASPIAN GULL - thanks to Ian Lewington for spotting that and just goes to show how little I still know about gulls!


There were a few interesting birds this evening. Firstly the county's first GOOSANDER of the season turned up with two males and a female coming in to roost. Secondly there was a lovely PEREGRINE which caught and ate a Black-headed Gull just a couple of hundred yards north of the floods. With such huge numbers of birds about at present its bound to attract more raptors over the winter period. There was nothing of particular note in the gull roost this evening but numbers were reasonable given the regular disturbance by dogs and runners.

The Peregrine eating its catch
No comments:

My usual last light visit to the Meadow turned what I thought was up the first Yellow-legged Gull of the season with a nice adult bird in amongst a reasonably sized flock. However, when Ian Lewington saw it he re-identified it as a CASPIAN GULL - a most welcome upgrade!

There were quite a few Lapwing today though still no Golden Plover and no other waders this evening. 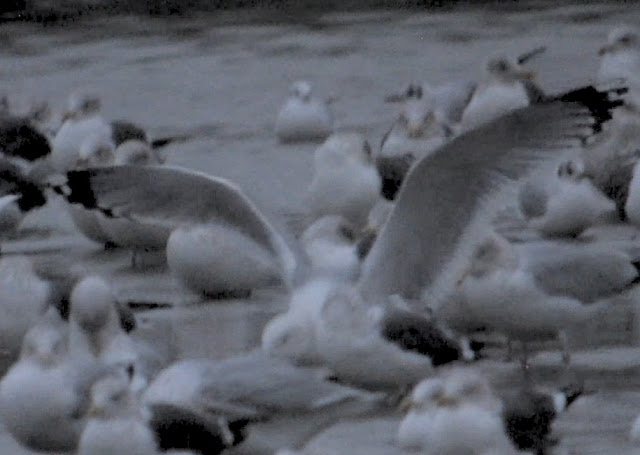 I'm gradually making counts of the numbers of wintering duck present on the Meadow, partly as I've taken over the WeBS counts for the site and partly out of curiosity. Today it was the turn of the Wigeon where there were an amazing 1250 birds.With several thousand Starlings and Black-headed Gulls we must have at least 5000 birds on the Meadow at present.
No comments:

The recent heavy rainfall has done it's job and pushed the floods from being embryonic through to full-grown. What's more the damp conditions have been bringing in birds far and wide and the Meadow is now absolutely heaving with birds. We've even had our first waders of the season back with a lone REDSHANK, a single DUNLIN and a couple of SNIPE. There was also an impressive count of 100 Lapwings today though no Golden Plover.


On the wildfowl front there are lots of Wigeon, Teal and Mallard and loads of geese. These are mostly the feral Greylags but there were at least 50 Canada Geese this evening. The star birds of my visit though were four WHITE-FRONTED GEESE which flew in as the light was fading. I presumed at the time that they were the four Otmoor birds which hung around there for several weeks. If they linger then I'll need to check their ages as the Otmoor ones consisted of two adults and two juveniles. Anyway, there were a most welcome year tick for the Patch.


I'm pleased to report that we're also getting a modest gull roost in the evenings again. As usual, the numbers seem to vary but on good nights we're getting several thousand Black-headed Gulls and hundreds of larger gulls (mostly Lesser Black-backed Gulls). It's time to start looking for Caspians and Yellow-legged Gulls again - hoorah!

I'm very pleased to announce that after a rather prolonged dry spell the recent rain has at last re-instated the floods. As yet they are rather modestly proportioned and whether they stay or not very much depends on how much rain we get in near future but for now at least they're back. What's more it didn't take long for the winter duck to return and a few days ago I was pleased to see about 350 WIGEON and about 100 TEAL once more gracing the floods with their presence along with good numbers of Mallards as well.


Apart from the ducks there are still Linnet, Starlings, Meadow Pipits and Pied Wagtails to be seen on the Meadow area and we've even had some loafing gulls as well. Let's hope the floods get extensive enough for them to start roosting there again.


Apart from that there's been a few things of note: the GREY WAGTAIL has been seen regularly about the place, I saw the KINGFISHER along the Castle Mill Stream again recently and I've had a fly-over LESSER REDPOLL and a few SISKINS. I also thought I heard the NUTHATCH over by Medley Farm copse again this week.

On the raptor front it's mostly been the RED KITE and a Kestrel though Adrian Grey reported a possible MERLIN a few weeks back on the Meadow. This is a species which has been reported as "possible" quite a few times over the years though we've yet to have a definite sighting whilst I've been birding the area.
No comments: