There have been a couple of proper Patch Mega's since my last post. Nothing of national importance but enough to get locals hurrying out to the Meadow. The first was a Rock Pipit found by chance by Phil Barnett out in the Hinterland to the north of the flood area. There have only been four records of this species since 2007. There were several in the autumn of 2007, then a couple in 2010 and then this bird today. It didn't linger and (bar a possible sighting along the river shore the next day) was not seen again. The next Mega was even rarer and came in the form of a Water Pipit. Again found by Phil (who is having a great autumn in terms of rare bird findings on the patch) this is only the second record since 2007. Actually, a Water Pipit had been seen on and off at Farmoor and a "buzzy" sounding Pipit was kicked up from the grass a few days earlier but wasn't found again so in all likelihood it's been the same bird loitering in the general area and commuting between various local sites. This bird has been seen on at least two subsequent occasions though is often not on the Meadow so is continuing to roam widely. 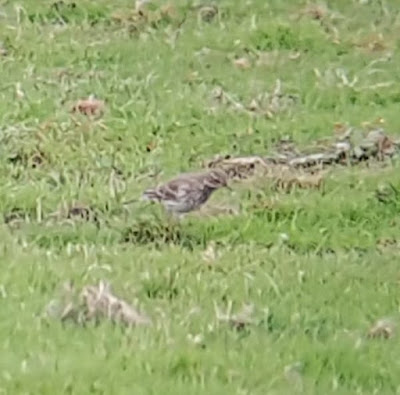 The Cattle Egrets have been settled up at Wytham for some time now with 30 lingering in amongst the cattle to the north of the Field Station.

The three Stonechats lingered for a while and another pair were found up near King's Lock. It's proving to be a good year for these charming chats.

One of the Great White Egrets has been seen a couple more times, once on Wolvercote Lake and once along the river.

There was another potential Patch Mega, indeed what would have been a patch first in the form of a Mandarin Duck when a "probable" was flushed from the trees up at Wolvercote Lake. Sadly it could not be refound but the habitat looks good for them so it's possible that one may turn up there again at some point in the future.

In other news, a Little Grebe was seen on the river near the Perch one day by Andrew Siantonas. 12 Ring-necked Parakeets flew over calling one morning. These are probably from the University Parks but it's a record count for the Patch with sightings up until now comprising just of one or two birds. At least one Barn Owl is continuing to be seen up past the ring road towards Kings Lock.

Now that we are well into autumn there are noticeable changes in the bird population with regular Siskins, Redpolls and Fieldfare see or at least heard overhead. In the Meadow area it's now Skylarks, Meadow Pipits, Linnet and Redwing that are being seen. At long last we have some flood waters back again and the first winter duck sightings have been had with a few Wigeon and Teal seen. The Barnacle Geese are being seen regularly along with a couple of Egyptian Geese. We are even starting to get a bit of a gull roost with about 500 Black-headed Gulls reported recently one evening. As the flood waters extend it will soon be time to start grilling the gull roost once more. Happy days!