The lagged effect of the weekend's rain has push the Meadow back into semi Lake Mode now and it's also meant that we've lost a lot of our birds. When I visited late afternoon there was just one REDSHANK down by the Poplar trees, a few distant ducks and our BRENT GOOSE which is still hanging out near the sailing club. The highlight for me was the presence of half a dozen each of SWALLOWS and SAND MARTINS hawking low over the river near the sailing club - it was so lovely to see them back again.


Roly Pitts managed to find several RED-CRESTED POCHARDS down by the floods when he visited earlier in the day though they didn't linger. This species has a rather strange relationship with the Meadow: clearly they are not really suited to the shallow waters of the floods so this species should be rather hard to come by like Tufted Duck and Pochard. However, for some reason over the last few years we've managed to get them on the year list when they've dropped in for a brief visit.

This early spring purple patch seems to be continuing with yet another good wader turning up today. This time it was a SANDERLING which I normally associate with later on in spring, if indeed we get one at at all - they are more usually a Farmoor bird. It was working its way back and forth over a narrow strip of mud along the North Reach this afternoon. Apart from that the floods were relatively bare with Storm Katie having blown lots of the birds away. Our BRENT GOOSE is still around and seems fairly settled for now in its usual spot. Yesterday Badger and Ewan managed to see several SAND MARTINS along the river whilst paying homage to the goose.

Our relatively spring-like weather has been blown away by Storm Katie and it was rather wild and woolly out on the Meadow today - still there were some good birds to be found out there so it was worth the effort. Our BRENT GOOSE is still around and seems to have settled in to grazing along the strip of grass between the floods and the river along with the few remaining Greylags which aren't off breeding somewhere. Either the same or a different LITTLE RINGED PLOVER was  around as well, along the North Reach. The OYSTERCATCHER tally has now risen to 7 birds though there was only a single REDSHANK about when I visited today. There was also a single drake PINTAIL in amongst the much diminished duck numbers. The personal highlight for me though was a CURLEW grounded on the North Shore by the rain. As I've said previously, this is actually not such a common bird on the floods and I missed the one a few days ago so it was a personal Patch year tick.

It's not every day (except the early days of January) when you get five year ticks in one day but that happened today. Part of this reason was that yesterday's Avocets meant that we had far more visitors to the Meadow and this increased coverage lead to more birds being discovered, as well as showing what a fast turn-over there can be on the Meadow.


It all started in the morning when Luke O'Byrne came to look for the Avocets. Whilst sadly they'd moved on he did find 4 SWALLOWS and 1 HOUSE MARTIN, both not just patch but indeed county year ticks I believe. In addition he spotted the long-overdue first patch KESTREL of the year down by the allotments behind the Walton Well Road car park. Later in the morning Mary MacDougall came down and she managed to find a BRENT GOOSE, initially down by the moored boats though it later moved northwards along the river to nearer the Perch. This species is less than annual so it's always great to get it on the year list. The 5 OYSTERCATCHERS, 6 REDSHANK and now just 1 RUFF were still around and other visitors contributed 2 RINGED PLOVER. By the time I visited in the evening the Ruff, half the Redshank and the 2 Ringed Plover had all gone but I did find the Meadow's first LITTLE RINGED PLOVER of the year along the East Shore.

The rain yesterday will have helped keep the floods fresh and with more forecast over the Easter weekend this will help as well. It's an exciting time of year!

It's been a productive day today on the Patch. Firstly Steve Goddard had a female BRAMBLING visit his garden in Wolvercote briefly and then this evening I found a couple of AVOCET roosting on the floods. This species is quite often an early spring bird here on the Meadow though it's by no means guaranteed that we get one each year. Apart from these birds, there are 6 REDSHANK, 2 RUFF and 5 OYSTERCATCHERS still about. 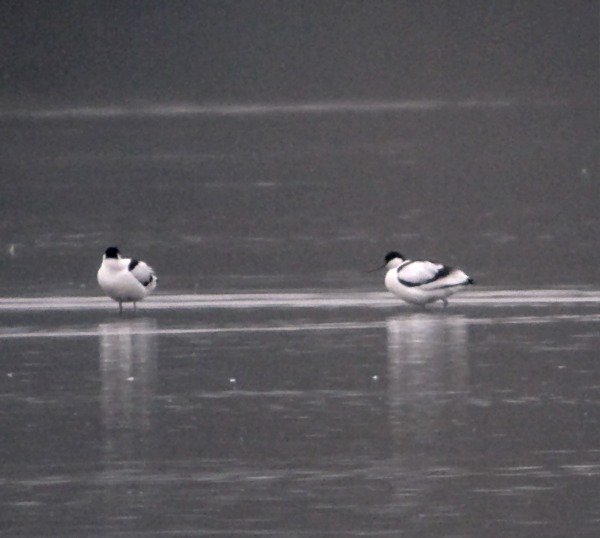 Duck numbers are starting to reduce appreciably already and the Meadow is looking noticeably less birdy than just a few weeks ago. Sadly, there's been hardly any gull roost to speak of lately.

So we've reached the Vernal Equinox and with the coming of Spring we've had the first migrants appear when Steve Goddard saw a couple of SAND MARTINS up in Wolvercote this morning. It's always a very special moment for me when the first migrants return.


What started out at the beginning of the week as a rather quiet period on the Meadow has by the week's end turned into quite an amazing wader fest. Numbers have been building throughout the week but has really only been the last couple of days when it's all really kicked off. Sunday's tally (courtesy largely of Ian Elkin) was 3 RUFF, 7 BLACK-TAILED GODWIT, 24 DUNLIN, 4 RINGED PLOVER, 1 CURLEW, 6 REDSHANK and 4 OYSTERCATCHERS. These are really good wader counts for this time of year - to have 49 waders on the floods and it still being March is very good. I'm particularly pleased about the Curlew which I've been hoping for for several weeks now as this isn't a straight-forward bird to get on the year list.

By contrast duck numbers are slowly starting to dwindle though we're attracting several SHELDUCK to the floods (as we usually do at this time of year), there are still a few GOOSANDER coming in to roost and a few PINTAIL are still around. Talking of Goosander, there were a pair on the Castle Mill Stream this week which gave lovely close views.


So, now that the first migrants are in, what can we expect over the next couple of weeks? Little Ringed Plover is the obvious one and it's prime Med. Gull passage so it would be great to get one of those on the list. Talking of the year list, at the start of the year I made a list of all the winter species that I'd expect to have seen by about this time of year and now that we've got Curlew the only two things that are left are Nuthatch (which is probably still lurking in the Medley Farm copse) and bizarrely Kestrel, which I've not managed to see yet so if anyone sees one on the Patch then do let me know (it's only a matter of time before they return to Burgess Field I expect).

Here are the Webs Count figures for Port Meadow for this Sunday just gone, courtesy of Anthony Cheke.

The Meadow has gone back to Lake Mode now - the midweek rains have caused the rive to burst its banks and we've got "lake" more or less up to the north end of Burgess Field. Sadly this meant that we lost many of our waders which have moved on elsewhere though I did still manage to find 2 REDSHANK and 1 OYSTERCATCHER when I visited on Thursday late afternoon. Still I can't really complain as now that it's nearly spring every top up to the floods is vital as we battle with the forces of evaporation which are trying to deprive us of our habitat for the crucial spring passage period.


The highlight of the week was this morning when I paid a visit to the Trap Grounds. I like wandering around here though to be honest there's not usually much to see from a birding point of view. On the way back out again by the boardwalk I spotted a Greater Spotted Woodpecker, calling loudly and harassing another smaller bird which turned out to be nothing less than a LESSER SPOTTED WOODPECKER - a real county Mega these days. I watched it for about five minutes before it disappeared - it seems that the Greater Spot's continued harrying proved too much for it in the end. 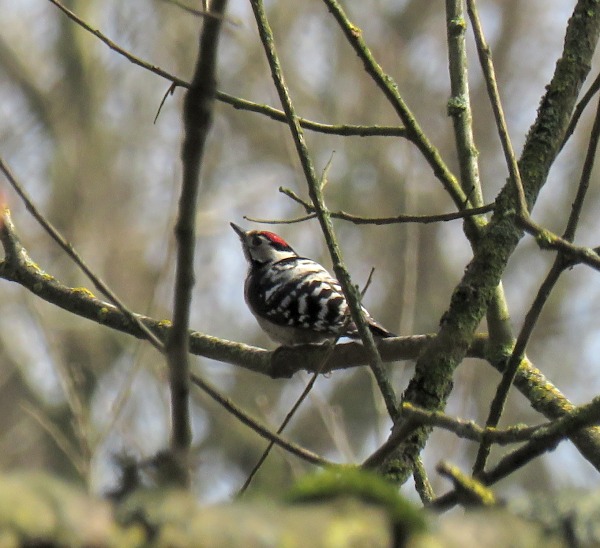 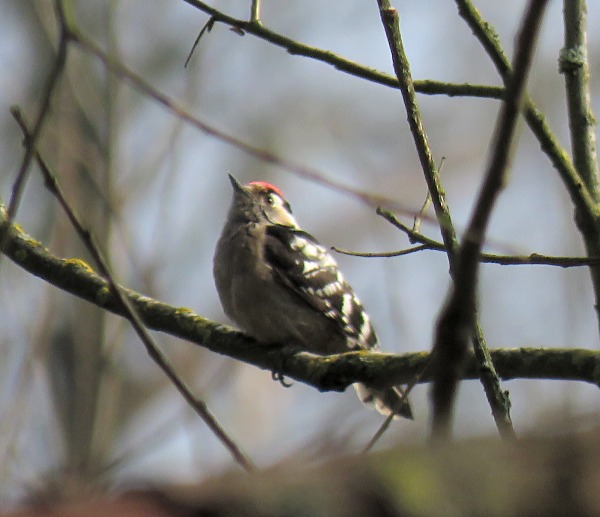 A couple of new year ticks to report today. Firstly as part of the on-going wader-fest we had a couple of  BLACK-TAILED GODWITS (still in winter plumage) drop in today. The wader counts seem to vary quite a bit from day to day and today's accompanying tallies were: 2 RUFF, 3 OYSTERCATCHERS, 4 DUNLIN and 5 REDSHANK.


The second year tick was a Grey Wagtail up at Wolvercote Lakes, found by Mary MacDougall, who also reported a singing Skylark up by Wolvercote Common again.

A late morning trip to the Trap Grounds today found the CETTI'S WARBLER still singing away in the reeds. Talking of Warblers, there was also a Chiffchaff flitting about near the small side pond and a Blackcap that was briefly in full song. Spring is clearly just around the corner!

It's been another good week on the Meadow with waders very much taking centre stage.We've had four RUFF with us for most of the week along with 3 OYSTERCATCHER (though this count went up to 5 at the weekend). There were one or two RINGED PLOVER still with us for the first half of the week, up to 6 DUNLIN and a peak count of 7 REDSHANK. To add to this wader-fest as well as the good numbers of Lapwing we're at least getting decent counts of Golden Plover with up to 800 birds reported - time to start looking through them for rarer cousins! All good stuff!

The gulls by contrast have been somewhat disappointing. Whilst there have been reasonable numbers we've not had anything of particular note. Now that we're into March it's time to start looking out for Mediterranean Gulls so that's something to look forward to.

As far as ducks are concerned alongside the resident winter duck we've been getting a handful of PINTAIL still around, up to 6 SHELDUCK and modest numbers of GOOSANDER are still coming in to roost.


Elsewhere there has been another Sparrowhawk sighting to report from Nicola Devine and several Reed Buntings are about in and around the Trap Grounds area. I also had a couple of Skylark sightings (a year tick) reported to me from up by the Wolvercote Common area.