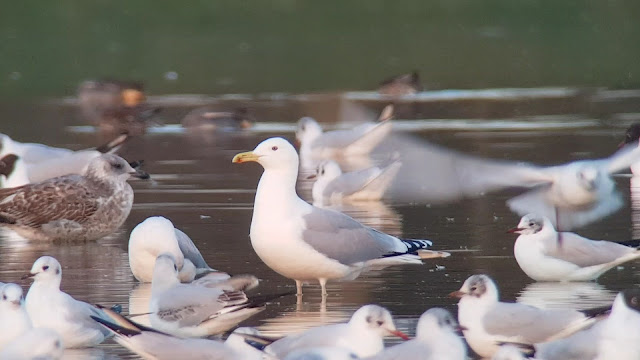 In other news Mary MacDougall reported a couple of GREY PARTRIDGE on the Patch as well. As this species actually bred here last year I'm deliberately being vague about the exact location but it's great to have them back again.
2 comments:

The much milder weather has brought on the first signs of spring in the bird world. Whilst it's still too early for any actual summer migrants we've had a couple of species on the floods which I typically associated with very early spring, namely OYSTERCATCHERS and SHELDUCK. There was one of the former on Friday with the number going up to two over the weekend along with three of the latter species. Whilst we already have Shelduck on the year list, it's around this time of year that they start to be seen on the floods.

There was also a report of a STONECHAT on the scrub north of the Perch this week from Sam Watson. Since the two extremely cold winters that we had a while back this species has gone from a guaranteed record each year to something much harder to get so it's nice to have one seen on the Patch so early on in the year.


On the gulling front, it's been much quieter this week. I visited each evening from Monday through to Thursday with precious little reward for my efforts apart from a couple of YELLOW-LEGGED GULLS. Then Thomas Miller took over for the weekend and his keen eyes managed to pick out a couple of CASPIAN GULLS, both birds that we've seen earlier on in the month here.

The warmer weather has brought out the first BRIMSTONE butterflies to various local gardens (including my own) and the first bees are now buzzing about as well. With all the talk being of a record breakingly hot year this year, we might well have a very mild and early spring this year.

Addendum
I forgot to mention that Dave Doherty found a male POCHARD on the floods this week. As is usually the case with diving ducks they tend not to linger too long once they discover how shallow and fishless the waters are and it was soon gone. Still as a less than anuual visitor it is a good record for the Meadow.
No comments:

A heavy pair of binoculars -- in good condition apparently, except for a broken strap -- has been found on the Meadow and left on the corner house of Longworth and Southmoor Roads. If you'd like to claim them then please telephone 511474.
No comments: 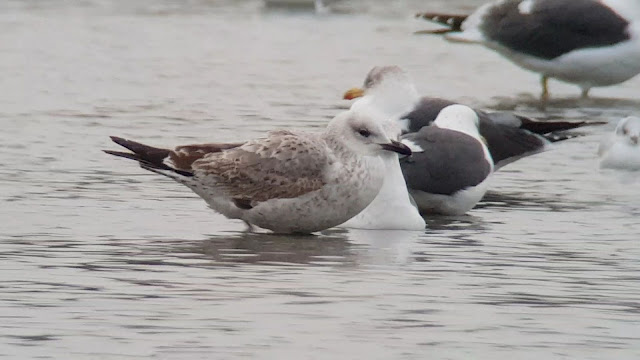 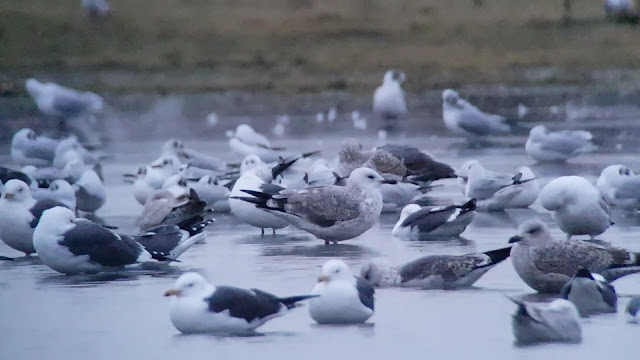 Now that we've got through the cold snowy patch and back to milder windier weather, the gulling is back on track. Our first winter MEDITERRANEAN GULL is still being seen most evenings as well as a few YELLOW-LEGGED GULLS (1w, 3w and adult this evening) and we've had a REDSHANK pop in on a few occasions as well. However, after last month's amazing tally of four different Caspian Gulls, so far this month we've not had any.


We also had our first LITTLE EGRET of the year this evening: working its way along the ditch down by the boat moorings.Also a drake TUFTED DUCK on the floods this evening was a most unusual sight. Whilst this common diving duck can usually be found up at the Wolvercote Lakes, we only normally see it down at the south end of the Meadow when it's frozen or the floods are in Lake Mode so this was a notable record.

The most stand-out record since my last post was an amazing sighting of a KNOT up at Wolvercote Common just south of the allotments by Colm O Caomhanaigh on a very snowy 2nd February. I can only guess that it was grounded by the weather and with everything frozen had just decided to tough it out where it was until it thawed - I hope that it got through it all OK. Knot is less than annual on the Meadow so is a good record to get on the books.


With the Snowdrops and Crocuses now coming out and the milder weather one can't help but start to turn one's thoughts towards Spring though we've still got a fair way to go yet before we can start to think about the first spring arrivals. In the meantime it will have to be gulls to keep us going through the month!
1 comment:

So that's the first month out of the way. Looking back it's not been too bad really. It's always fun to chase around after the usual winter birds to get them on the year list and the gulling has been excellent this month. Since my last post we've managed to notch up yet another CASPIAN GULL, this time a fine 3rd winter that Thomas Miller found last Saturday. In addition the usual (presumably) 1st winter MEDITERRANEAN GULL popped in again last Friday. However, since the recent spell of cold weather the floods have been completely frozen and I've not bothered with the roost.

Apart from that there's not been anything of particular note.

Now that we've got to the end of the first month I'm going to start posting a "Wanted List" of things that haven't been seen yet that I would expect to be about somewhere. So please let me know if you see any of the following: