The Burgess Field SPOTTED FLYCATCHER is being very cooperative: this is now it's third day in the same location. It is more or less faithful to a Willow tree just past the spoil heap on the cinder path that runs along the west side of the reserve just as it starts to bend around to the right and where the first turn-off is to the left. However when myself and Thomas Miller were there this morning it was seen to do quite a large circuit all the way along the hedgerow to the railway line side and then back along the next hedgerow south to get back to the tree. It generally sits at the top of the tress and bushes which makes it comparatively easy to keep track of. Well worth a visit! 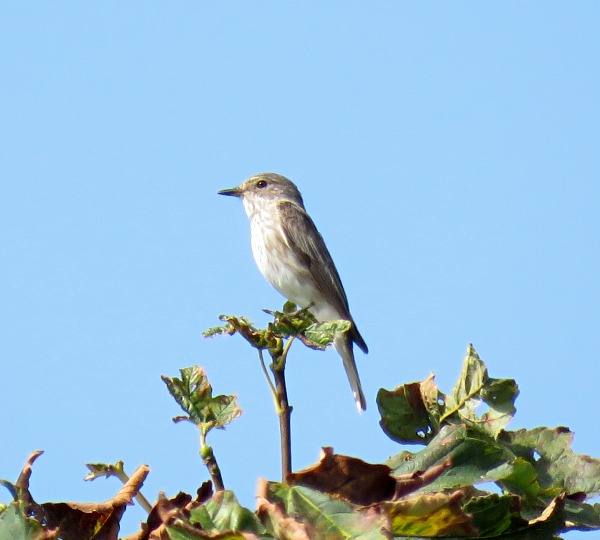 I'm sorry about the lack of posts - I can't quite believe that it's getting on for two months since my last one! Predictably, with the lack of any floods it's been fairly quiet but I'll do a round-up of what's been happening.


On the bird front we're now through the summer doldrums of June and July and we can now expect to see some returning birds passing through. To that end a couple of YELLOW WAGTAILS have been down in amongst the cattle recently. Rummaging through the autumn wagtails looking for Blue-headed Wagtails is a favourite autumn pastime of mine though we're very lucky if we actually find one. There were lots of Swallows and House Martins hawking over the southern end as well yesterday. These species will increasingly congregate in large post breeding flocks before heading off south at some point.

We actually managed a new year tick yesterday when Thomas Miller turned up a pair of SPOTTED FLYCATCHERS in Burgess Field yesterday evening. I paid a visit late morning today to find one still present and Mary MacDougall reported that it was still there mid afternoon. Somehow we manage to get this species on our list pretty much every year though it's a comparative county rarity and I always get excited to add it to the list. Over the coming weeks expect more migrants to start passing through the area and the Swifts to depart for warmer climes. What we really need though is a good period of rain to recreate the floods.

There's been some good action on the insect front as you'd expect over the summer. All the usual Dragonflies are out and about. Yesterday a stroll along the Castle Mill Stream found a Brown, two Migrant and Southern Hawker all on the wing as well as several red Darters of both species.

The Trap Grounds though came up trumps once again when expert insect rarity finder Nicola Devine found and photographed a SMALL RED-EYED DAMSELFLY on one of the ponds there. This species is very local here in Oxon with just one or two other sites where it can be found so this is quite a turn up for the books. I have made a couple of visits to look for it subsequently but so far haven't been able to relocate it.

On the butterfly front, once again Nicola has managed to turn up both SILVER WASHED FRITILLARY and BROWN HAIRSTREAK in the Trap Grounds. It's good to know that these species are "regular" at this site though it must be a small colony there at best.

Finally I need to mention that the Trap Grounds, which has featured so strongly in recent blog postings has now got its own blog. It's only just been launched so there are only a few posts on it but expect more activity over the coming weeks as it gets properly established. Do go and check it out though as the Trap Grounds is a real gem of a site that deserves to have its own blog.