It's actually been a pretty good couple of weeks since my last update. Granted there's still no water on the Meadow and in fact it's been unusually dry of late but at least we've been getting some good passage passerines to talk about.


To start with we've got one more year tick to mention: Steve Goddard has had a NUTHATCH visiting his garden in Wolvercote recently.

It's been a very good year for SPOTTED FLYCATCHERS in the county with unusually large counts passing through. Here at Port Meadow we've been in on this action as well: we'd already had two of them that I mentioned in my last post but we've now had at least three more to report. Thomas Miller turned up a couple on one day recently: one in Burgess Field near the railway line and one over in Binsey churchyard. Nicola Devine then had one (or possibly two) in the Trap Grounds a few days later. For a species which we're normally lucky to get one of it's been quite a year!

WHINCHAT are normally even rarer that Spotted Flycatchers but we've managed a second bird this autumn, again found by Thomas Miller in the Snipe Field in Burgess Field. What's more a few days later he found a juvenile STONECHAT there as well. Sadly these days this species is about as rare as Whinchat are on the patch. There was also a WHEATEAR at the southern end of the Meadow briefly earlier on this week.

What might have been the bird of the year had it been firmed up was a record of a possible Twite. Seen briefly and heard calling by Thomas Miller over by the Perch it was sadly never promoted beyond a "possible" and wasn't seen again. By way of compensation HOBBY was spotted later that day whilst he and I were out looking for it.

Finally, one of my favourite pastimes in the autumn is hunting for BLUE-HEADED WAGTAILS in amongst the YELLOW WAGTAILS. For those of you who aren't familiar with this sub-species it's the continental version of our Yellow's and we often manage one each autumn. Today I managed to find one in amongst the half a dozen or so Yellow Wagtails down at the southern end in amongst the cattle. Incidentally the peak tally of Yellow's so far this autumn is a paltry dozen or so, well down on counts of at least double that that I've got in previous years. This is sadly all too indicative of the decline in this farmland species. 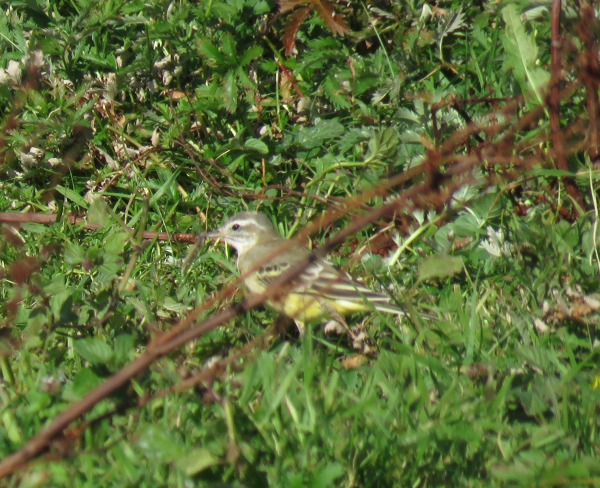 So here we are in September already, I can't believe how quickly the time has gone. Still there's actually been a bit of bird action to report and a whole flurry of year ticks. After his Spotted Flycatcher in Burgess Field, Thomas Miller managed to turn up a few more good passage passerines. The star of the show was a WHINCHAT which he found late one afternoon at the end of the very hot period of weather that we recently had. This species is certainly less than annual on the Meadow so its finding prompted a bit of a mini twitch by some of the Port Meadow local birders. As well as the Whinchat, Thomas also turned up a COMMON REDSTART (another less than annual passage migrant) and a few LESSER WHITETHROATS. To add to this list whilst I was there I kicked up a GRASSHOPPER WARBLER from in the undergrowth though sadly it didn't linger. Still with Whinchat, Redstart and Grasshopper Warbler that was three ticks on one day!


The tick bonanza continued a day or two later when Thomas (who's been the stand-out bird finder of the year on the Meadow by a long chalk) spotted a HOBBY over the Meadow. What was probably the same bird was see later in the day by Mary MacDougall over Hayfield Road. This species is usually annual on the Meadow though we did miss it last year so it's good to have it on the list again.

To add to the action Matthew Lloyd recently found a WHEATEAR up at the northern end of the Meadow by the boundary with Wolvercote Common.

In terms of passage passerines, the only bird that we might hope for still that we haven't yet seen would be Tree Pipit which is quite a county rarity though we do have a history of having them turn up in Burgess Field. Beyond that it will have to be something altogether rarer that we've not had before. I did once see what looked suspiciously like a Melodius/Icterine Warbler in Burgess Field. It was huge compared to the neighbouring Chiffies though the views were all too brief and it flew off never to be seen again so you never know what might turn up there. Apart from that, there are a number of waders that we still need though without the flood waters we are going to be lucky to get those on the year list.