At last spring is sprung! Indeed the weather has been absolutely sublime the last few days - a welcome end to a long winter. Chiffchaff have now started singing and the first singing Blackcap was reported yesterday as well. Although it is only March such is the uptick in bird movement and sightings that it feels more like late April. It seems like things are all going to be early this year once more.

On the wader front there had been a lot of movement. It does suddenly seem like it's all kicking off though the reality is that it's all "winter wader" species on the move, . So we've had Black-tailed Godwits coming through in flocks of up to 11, a few Ruff (year tick!), some Dunlin and some Redshank - so all the classic winter wader species. In fact I am somewhat surprised that we've yet to have our first Little Ringed Plover. I guess that my expectations are very high these days of things being early.

Over the last couple of days we've had an influx of Garganey into the county with 8 birds suddenly arriving on the same day. I was very much hoping to get this charismatic species onto the Port Meadow year list and Ben Sheldon duly obliged by finding a pair today that had dropped in mid morning. Fortunately they stuck around until the end of the day so that people could come to pay homage.

The pair of Garganey

Apart from this start find, duck counts are definitely starting to go down. Our Shelduck numbers have dropped sharply from up to a dozen down to just a few pairs. There are still a few Pintail left and we are getting a few spring Gadwall appearing now as they usually do at this time of year. I would guess that with this find settled weather forecast until the end of the month this trend is only going to continue.

On the gull front, roost numbers have dropped sharply though the 2nd summer Mediterranean Gull has been roosting with us most evenings which is always nice to see.

As far as passerines are concerned, the star bird of  year so far, the Siberian Chiffchaff, turned up again after an absence of a couple of weeks. This time it was heard to make it's diagnostic call by Thomas Miller so we can now say with full confidence that it is indeed what we assumed it was. Mind you it was a pretty classic looking bird anyway so if it hadn't been one then I'd have been amazed.

Brambling are still being seen at the Burgess Field feeder with three different individuals now recorded there as well as a small flyover flock. It's been an excellent year for what is normally a less than annual species on the patch.

So looking ahead, we've still to get Sand Martin and LRP on the year list and we should start to see some more warbler species arriving over the next few weeks. My one concern is that in this good weather the floods aren't going to last that long so it's important to make the most of them whilst they are still with us,

In case this of interest to anyone, I've asked and non-Trap Grounds people are welcome to attend. I will be giving a short talk on the Birds of Port Meadow as part of the meeting.

The Trap Grounds ANNUAL GENERAL MEETING will be held by Zoom Friday 18 March, at 7.30 pm. We hope you can join us to hear brief reports about last year's activities and our plans for the coming year.

Following the business part of the meeting, local ornithologist Adam Hartley will give an illustrated talk about the birds of Port Meadow. And Committee members will present A Year In The Life of The Trap Grounds, illustrated by some of Nicola Devine's finest photos. The meeting will be hosted by Ian Haslam. Here is the link:

You can tell that things are picking up as I'm doing a new blog post so soon after the last one. In March we start to anticipate the arrival of the first spring migrants and as things are generally happening earlier each year, we might start to look out for things that would normally be arriving in April. Indeed we've already had our first spring migrants in the form of a total of three Wheatears. Two were found yesterday loosely following the river north on the Hinterland and then another single bird was seen today in the morning and was still present late afternoon before moving on.

These are the first Wheatears in the county this year to my knowledge though we've already been beaten to the first Little Ringed Plover by Grimsbury Reservoir. It used to be the Meadow that got this species first most springs but the last few years Grimsbury has taken that award - indeed they've now had two of them already whilst we've yet to have our first.

We did get what was probably our first White Wagtail of the year today though the light was very bright and harsh and the birds were very distance so I wouldn't swear to it. This species normally turns up in April so it would be a very early record if it were one.

There was another Mediterranean Gull in the roost this evening: a fine 2nd summer bird. This is now the fifth Med Gull of the spring season already - a great total! Apart from that the gulling has been a bit quiet with just the regular appearance of a 2nd winter Yellow-legged Gull in the roost worthy of note.

On the wader front we've had the usual 2 or 3 Oystercatchers and 1 or 2 Redshank. We did have a flock of 4 Black-tailed Godwits on the 7th but they didn't linger. A pair of fly-through Curlew on Friday were a welcome year tick: this species normally is seen in February or not at all so I'm pleased to have it on the list.

On the duck front we've been getting up to half a dozen or so Pintail and Shelduck with the occasional Goosander as well. Number seem to be holding up at the moment but I guess will start to dwindle in due course.

On the passerine front the Siberian Chiffchaff proved to be a one day wonder. I've since been told that there have been no prior records of this subspecies on the Meadow so it's currently holding the bird of the year slot though it's early days of course. The 2 Brambling have been more obliging and have been hanging around in Burgess Field for a while now. There was also an intriguing report of a Black Redstart up in Wolvercote but it wasn't firmed up at all so I'm inclined to leave it off the year list.

Looking ahead, we should expect our first Sand Martins and Little Ringed Plover very soon now. My main concern now is the weather: with some fine settled conditions forecast for the rest of the month the floods will start shrinking far too early. Also good weather tends to mean that birds are more inclined to keep on with their migration rather than dropping in for a rest on the Meadow. We shall see!

Once again I've left it longer between posts than I would have liked and there is a fair bit to catch up on. As I've said previously, February is generally a fairly quiet month on the birding front but we haven't done too badly on the Meadow.

Starting with gulls, the roost is moving towards more of a spring feel to it with lots of Black-headed Gulls but far fewer larger gulls. Sifting through the smaller gulls we've had a great Mediterranean Gull passage so far with single adult birds on four occasions: 15th, 21st, 26th and 6th. Traditionally the Med Gull passage is more of a March phenomenon so it's a bit early this year. It's great to have had so many records already this year.

There have still been a few Yellow-legged Gulls around and a splendid 2w Caspian Gull was the star bird on the 3rd March. 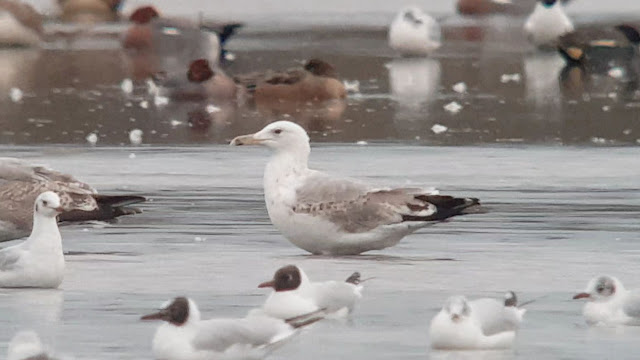 On the wader front whilst it's still too early for spring passage waders there has been some definite movement on that front with Redshank numbers changing from the singleton that overwintered with us and up to 5 birds seen one day. A few Dunlin have also started to make an appearance with a peak count of 3 birds. There have been up to 3 Oystercatchers, they seem to be a pair and another single bird. A Black-tailed Godwit has been seen on a few occasions as well. The most unusual record is a couple of Ringed Plover on the floods one day: this is very early for this species which more usually passes through the Meadow in April.

Duck numbers are still good though we might start to see numbers diminishing over the coming weeks now as birds start to move on. We've had up to 11 Shelduck, a few Pintail, good counts of Shoveler (with over 70 seen on one day!) and a few Goosander coming into roost or being seen on the river. The first spring Gadwall are now also starting to appear.

Away from the floods we've had up to two Brambling in Burgess Field which have hung around for a few days now. This is quite a rare species for the Meadow so it's great to have one stay so long so that people can get to see it.

Up at Wolvercote Lake a Little Grebe was heard there recently and a calling Cetti's Warbler (a nice year tick for a less than annual species) was heard one day. A Nuthatch is back at Medley farm after not being heard there for quite a while now.

One of the star passerine records of the period was a putative Siberian Chiffchaff which was hanging around by Burgess Field gate this afternoon. This Siberian subspecies of Chiffchaff is quite distinctive looking, being a grey brown on the head and mantle with only a hint of colour in the wings and this one fit the bill perfectly. Strictly you need to hear them call to be 100% certain of the ID but it looked good to those who saw it.

So all in all, quite a lot of good birds over the last three weeks! Looking forward, over the next few weeks we should start to see Sand Martins appearing and maybe even the first Little Ringed Plover though both these things will very much depend on the weather and the current cold northerly wind won't help matters at all. As usual I am also fretting about the floods: a nice spell of wet weather would certainly help to top up the all important flood waters ready for the spring wader passage.