Despite it being statistically the best month of the year for rare birds, up until this weekend October had been rather quiet. Sure, there were plenty of flood waters and lots of birds to look through but it was pretty much the same birds each day. To give you an idea of what was generally around below are the WeBS (the monthly countrywide wetland bird survey that is carried out each winter) counts from Thomas Miller.

Firstly, it was nice to see that the Garganey was still around. It hadn't been reported since it was originally found and it just shows how easily missed it is that has (presumably) been here all this time.

I was finally able to do some gulling this weekend - a luxury I am no longer able to do during the week due to work commitments. On Saturday there were barely a couple of dozen large gulls in the roost but quite late on one intriguing bird flew in which caught my eye. The mantle was really dark being just one shade off a Lesser Black-backed Gull and it had a very neatly defined streaked head. It flew in and immediately tucked itself up and went to sleep. I only had the briefest of views of its head but the bill did look reasonable for an Azorean Yellow-legged Gull (which was what I was thinking, given the other characteristics). Given how dark it was and the fact that it never moved from being asleep I wasn't able to get better video footage. In discussion with Ian Lewington it was agreed that really decent head and wind shots would be required to clinch the ID. I'm just hoping that either it returns to the Meadow or it's found at one of the other county sites during the day where the ID will be confirmed.

Just to give you an idea of what an Azorean Yellow-legged Gull should look like, this is a picture of the one at Appleford 11 years ago.

A lazy Sunday morning en famille was turned upside down mid morning when Ollie Padget messaged that a Glossy Ibis had just flown in and settled on the floods. I rushed down there and managed to see it for all of one minute on the ground before it flew up, spiralled around for a few minutes before drifting off to the north east.

About three quarters of an hour later a "probable" Glossy Ibis was seen at Otmoor so it may well have relocated there. This is just the second record of this species on the Meadow, the first one being in May 2014 - yet another good bird for the Meadow in what is turning out to be a vintage year.

I was back Sunday evening for the gull roost along with Ollie and Thomas Miller. Sadly there were almost no large gulls at all and no sign of "Ozzie" the Azorean. However, Thomas managed to confirm his credentials as the new county "gull whisperer" by finding two (adult and 2nd winter) Mediterranean Gulls in the space of a few minutes - something I've failed to do in several weeks of searching. This was the second year tick to be added within the same day so a very productive day!

It's been a good week for birding on the Meadow. The floods expanded enough for the river briefly to burst its banks and we had a couple of days in Lake Mode before it quickly subsided where it's now been pretty stable in size for a few days now. The birds are all loving it and the water is covered in all directions, mostly with geese with Canadas and Greylags and the Barnacles all hanging out in good numbers. Duck numbers actually haven't been that large with just modest counts of Wigeon and Teal and a few Shoveler but it's still rather early in the season. Our star Garganey has been hanging around all week and we've also had one or two Ruff which have dropped in though the shoreline is rather "lumpy" at the moment because of the vegetation so it's often difficult to spot the waders. However, the stand-out bird since last time has been a Whooper Swan which was found on Saturday by Colm O'Caomhanaigh.

The Whooper Swan on the day it was found

In the past "winter" swans such as Whoopers and Bewicks have occasionally dropped in on the Meadow at around this time of year. However they never normally stay at all and indeed this bird headed off fairly early on Sunday morning. However it didn't seem quite to know where it wanted to go: it was found (by Colm again!) up by the Victoria pub on the river Cherwell mid morning before coming back to the Meadow where it spent the rest of the day. Finally on Monday morning it was off fairly early.

Apart from that there's been various reports of increased bird movement recently including Redwings which are now starting to be seen regularly. Indeed in a ringing session in Burgess Field Ollie Padget and his team managed to catch a pair.

Finally, one of the star birds of the week was actually only mentioned to me en passant when Nick Boyd happened to say that he'd had a Yellowhammer fly over during a moring visit. This species is a real Patch Mega - there's only been one record during my time on the Meadow which was during one of the extraordinary winters where thick snow lead to a lot of winter bird displacement and Steve Goddard had this species in his garden. You would think that you might find them around the farmland over by Medley Farm but, whilst it is indeed a rather underwatched area, I've not heard of any records there.

Looking ahead the wind is swinging back to easterlies for the next few days which is great for east coast birding but whether this will mean anything filters through to us or not is another matter. Personally I'm still hoping for a yank wader of some kind to turn up now that we've got the floods back. One can dream! 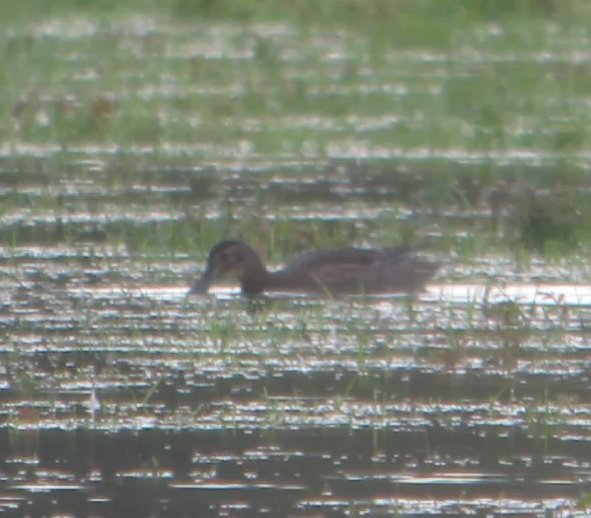