The hot weather that we're now enjoying is finishing off the floods now - they're really on their last legs but are being picked over by the Little Egrets and Herons who are fishing out the last of the trapped fry.

Still the good weather has brought out the dragonflies at last and there have been lots of sightings. I've even had a Brown Hawker and a couple of Southern Hawkers pass through my garden. Down at the Trap Grounds on my last two visits I've managed to see a patrolling male Emperor, a Four-spotted Chaser, a couple of Brown Hawkers, a Southern Hawker, a Common Darter, a Ruddy Darter, and plenty of Azure and Blue-tailed Damselflies. Over the last few weeks the combination of the better weather and the then still full floods was attracting a lot of dragonflies with several Black-tailed Skimmers, Emperors and Brown Hawkers being seen.

I must admit that I've not really been giving the Patch my full attention over the last few weeks: this is traditionally such a quiet time of year in the birding calendar that I've been looking elsewhere for my nature fix. Still, when I did make a visit on Monday I was rewarded with 5 BLACK-TAILED GODWITS, 2 OYSTERCATCHERS and 5 LITTLE EGRETS as well as hoards of Black-headed Gulls and just one or two larger gulls. The Godwits are a sign that in wader world it's the return passage already for those that have failed in their breeding attempts up north. As if to confirm this, the following day Stever Goddard had 3 COMMON SANDPIPER as well as 3 Oystercatchers. Given this increase in wader action I'll have to make more of an effort to visit the floods which are still looking remarkably good for the time of year though we do need some rain just to keep them topped up.

A couple of weeks ago I paid a visit to Burgess Field where despite the heavy cloud there were loads of Ringlets and Marbled Whites about - I always love to see these species at this time of year. 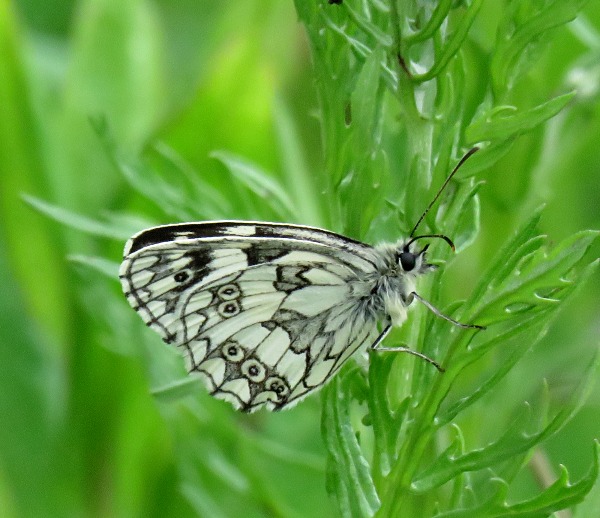 A couple of snippets of bird news to report first of all. Some late news from the 25th when Bob Pomfret reported a GREEN SANDPIPER (possibly the same one that I saw a couple of days later) and 3 REDSHANK. I also forgot to mention a COMMON SANDPIPER on the floods on the last day of the month. Apart from that the floods are still in good shape with the regular rain keeping them well topped up.


On the plant front I went to take a look to see if I could find any CREEPING MARSHWORT about yet. Of course with the floods still being present there's not so many places to look but I managed to find some OK. For those of you who aren't familiar, this plant is only found at Port Meadow in this country though the Oxford Rare Plant Group have now established a second colony at another site nearby by way of a backup and I've been told that that colony is doing very well.

I also went a few weeks ago to a site at the north end of the Meadow area to catch up with the BIRTHWORT population there. This plant is so named as it was formerly used to induce labour though it's usefulness is doubtful as it's rather poisonous! Anyway, it has rather interesting flowers and this site is one of only a handful in the country where it can be seen.