The wader passage is stepping up a gear now: today we had 4 RINGED PLOVER, 2 LITTLE RINGED PLOVER (remarkably our first of the year), 3 DUNLIN, 2 COMMON SANDPIPERS (again our first of the year) and a couple of OYSTERCATCHERS. Whilst looking at the waders this morning I heard the distinctive call of our first YELLOW WAGTAIL of the year though it didn't linger at all. In addition on the floods were the usual SHELDUCK, a handful of GADWALL and a couple of COMMON TERNS.

The highlight of the weekend though was found by Martin Gebauer in the evening when he spotted a PINK-FOOTED GOOSE in amongst the Greylags and Canada Geese a fair distance to the north of the floods. Whilst being a very common winter visitor to the east coast of this country, this species is pretty rare in the county. Now it's always hard to tell the provenance of a single water fowl and had it been a flock of a dozen or more then there would be no doubt about it. As it is, it's open to debate though the bird was unringed which is in its favour. I think that in this instance the best policy might be to turn a blind eye and quietly to tick it.


The Pink-footed Goose
No comments:

At last we seem to be getting some wader action! It's been a remarkably slow start on that front, despite having nice healthy looking floods there's been a real dearth of waders of any kind. In this rather late spring that we're having they seem to be running late this year by at least a couple of weeks. Finally this week things started to change when the first RINGED PLOVER of the year appeared on Wednesday. Then, whilst watching the plover I heard the distinctive bubbling call of a WHIMBREL which had touched down on the shore opposite me. Unfortunately, as is so often with this species on the Meadow, it didn't linger and within a few minutes it flew off again. A couple of days later we had a nice flock of 5 RINGED PLOVER and a single DUNLIN - these two species often travel together for some reason. Apart from that, there have been up to 7 OYSTERCATCHERS dotted around the shoreline this week and a peak count of 5 SHELDUCK. We've also had a BLACK-TAILED GODWIT with us for most of the week but that finally left today.

On the warbler front things are kicking off in Burgess Field. I went there mid week to take stock and found at least 6 WHITETHROATS in there all singing away from various corners of the reserve. What's more there was also a singing male LESSER WHITETHROAT as well - it's always nice to get this as a year tick. There are plenty of Blackcaps in residence in the reserve though no Willow Warblers as yet. As global warming is increasing, this species is tending to move further north so doesn't seem to linger in the county quite so much. Garden Warblers are starting to appear in the county now so they should arrive in Burgess Field any day now though there were none when I looked today.


Today there was a lovely flock of forty plus Swallows, House Martins and Sand Martins all hawking away low over the water in the dull conditions. I always love it when they're zipping around your head like this. Whilst SWIFTS aren't properly "in" yet, Mary MacDougall did spot some flying overhead mid week and they usually arrive at the start of May though they may be a week or two late this year.


Finally, Nicola Devine, who ensures that the Trap Grounds is always well watched, paid off when she found a lovely SPOTTED FLYCATCHER seeking shelter in the trees during a rather rainy period. This species is just about annual on the patch but it's always good to get it and there's rarely more than one record a year.

There are still plenty of waders and a few warblers that we might expect as well as things like Cuckoo, Yellow Wagtail, Tree Pipit and Redstart. In fact I've got a hit list of 22 species that we could well still get. This next few weeks should be the peak of the spring wader passage so it's a very exciting time for the patch.
No comments:

What a difference a couple of days makes! Suddenly we are in temperatures hot enough to be worthy of high summer and more is yet to come. It's transformed the Meadow which has gone from still having modest numbers of winter duck to being almost completely birdless: today there were just a couple of COMMON TERN, a handful of Black-headed Gulls, 6 SHELDUCK and just tiny numbers of Wigeon and Teal. The SANDWICH TERN from two days ago turned out to be a bit more than just a fly-through. Martin Gebauer spotted it later that evening still on the floods and yesterday it was around for the whole day, loafing on the shoreline with the two Common Terns and looking very much at home. 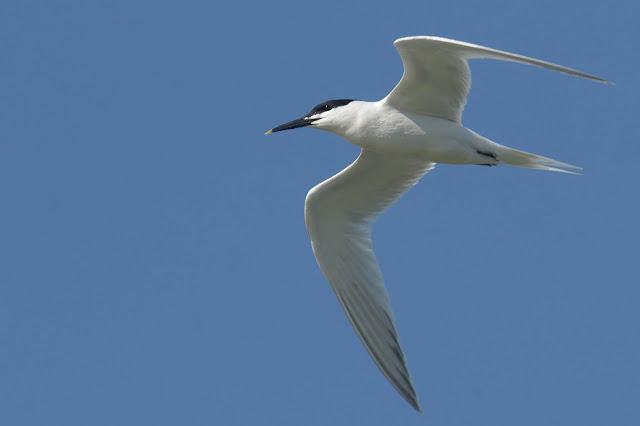 At this time of year there is a fast turnover in birds, which often just drop in for a few hours before continuing on their way. In the evening yesterday Martin Gebauer found a pair of BLACK-TAILED GODWITS, 2 OYSTERCATCHERS and a REDSHANK which had all gone by today. The House Martins are now back in their usual breeding spot on the eaves of the houses that back onto the Aristotle Lane footpath and can be seen hawking over the Meadow already.

In the Trap Grounds I heard the first REED WARBLER of the year singing away rather quietly from deep within the reedbed. With the floods now so empty it's time to turn one's attention to Burgess Field to start looking for the rest of the returning warbler species. It's an exciting time of year!
No comments:

In this rather chilly and breezy spring weather that we're having, it's a rather stuttering start to spring so far. The floods have gradually receded to a nice healthy size though they've so far been so full that there's not been much of a shoreline to attract any waders, There has certainly been some passage movement but it's been rather low key to date. A few COMMON TERNS have been going through and the first WILLOW WARBLERS have been seen and heard at the Trap Grounds and along the Castle Mill Stream. I also heard (though didn't see) my first Meadow SWALLOW but there have been no further Sand Martins so far.

The highlight so far was today when I was surveying the rather typical fare of late: 8 SHELDUCK, 3 OYSTERCATCHERS, 5 GADWALL, 1 REDSHANK and 1 COMMON TERN. I heard a Tern calling that wasn't a Common or Arctic and sure enough a SANDWICH TERN flew through, with a small fish in its bill, being hotly pursued by half a dozen Black-headed Gulls. This party flew off strongly out of sight to the North though a little while later the various gulls drifted back again. Sandwich Tern is a real patch Mega, this being only the third record to date though we were lucky enough to have one a couple of years ago at this time of year.

So with some hot weather now on the way, things should finally pick up. Indeed as I write this on the morning of the 18th I've already seen 3 HOUSE MARTINS, and had a Holly Blue and Brimstone pass through my garden. Spring proper is finally here!
No comments:

At last the first spring migrants have been spotted on the Meadow! A couple of days ago Steve Goddard had the first SWALLOW of the year hawking over the river and today I saw four SAND MARTINS over the river opposite the sailing club. A Chiffchaff has been singing in the Trap Grounds for a while now and I heard my first Blackcap singing in my garden yesterday. The first Brimstone butterflies are on the wing and I saw my first Small Tortoiseshell the other day as well. Now that we're into April we can start looking out for all the other spring migrants - it's a very exciting time of year!


Talking of the river, the recent prolonged rain has pushed it firmly into Lake Mode. In fact it's so full that there is hardly any strip of land between the river itself and the swollen floods. This does actually make viewing rather difficult as all the birds are presently half way up to Wolvercote along the north shoreline. All this does mean that at least we're likely to have some decent flood waters remaining for the key second half of the month which is the peak spring wader passage in the county.


In other news the BARN OWL is still being seen and indeed Mary MacDougall saw a pair of them in Burgess Field this evening! The best time seems to be from 7:30 pm onwards if you want to go to see it/them.