As you will have noticed, I've not posted anything for several days. It's not been for want of trying but there hasn't been that much to report with basically slight variations of the same birds all week. The highlight on the wader front was a second RUFF which appeared on Monday though by Wednesday we were back down to a single bird again and this evening it too had gone. By way of compensation though the DUNLIN count has gone up to five birds. The Golden Plover seemed to be around less, though I don't know whether it's because they've been disturbed prior to my last-light visits or perhaps they've just found somewhere else for now. Duck numbers continue to be solid though the Pintail seem to have moved on. Even the gulling has been somewhat disappointing up until today with rather small numbers in the roost. I presume that this is because of the relatively settled weather which has meant that the gulls could linger for longer in the fields or tips during the day before going off to roost. There have been a few YELLOW-LEGGED GULLS each evening but little else of note.


Tonight finally I did find a noteworthy bird in the roost in the form of an adult CASPIAN GULL. It certainly wasn't a classic "Pontic" (western) bird and had a lot of black in the primaries but according to Ian Lewington it more or less falls within the acceptable range for the darker winged eastern European birds. As Ian points out, there's a lot of interbreeding in amongst eastern birds with crosses between Caspians, Yellow-legged, Herring and even Lesser Black-backed and these hybrids often then going on to breed themselves. So, not a classic bird and perhaps there's a bit of a hybrid in there somewhere but it's nice to have such an interesting bird in the roost.

Some video of the bird preening, revealing the primary underwing pattern 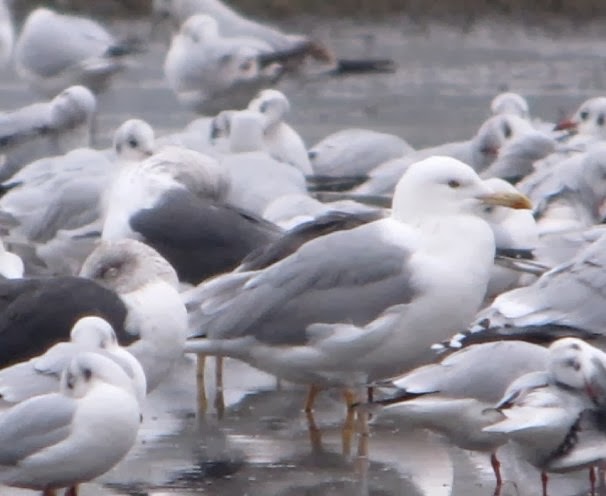 Family commitments meant that I wasn't able to visit the gull roost on either day over the weekend but I did manage a Sunday morning walk around the Patch. At the Trap Grounds I met up with Mary Gregory who was explaining about all the work that is going on there to turn the place into a better habitat. It all sounds very interesting and I look forward to seeing how it will all turn out. One noticeable improvements already from this year has been the addition of the wild Thyme and Marjoram in the open area which was an absolute magnet for the butterflies and bees this summer.


Burgess Field, which I haven't visited in a long while, was as birdless as ever though there was a nice flock of about 30 Redwings in the north east corner. On the floods themselves it was a case of the usual suspects in the usual places though today there was more of interest on the wader front with the discovery of one REDSHANK, the 3 DUNLIN still and a now RUFF as well hanging out near the Golden Plover flock (the latter now numbering about a thousand). The floods are looking pretty good now so with any luck they might all stay a while and might even attract some more waders in. Other birds of note this morning were a single drake PINTAIL and an adult YELLOW-LEGGED GULL amongst the loafers. 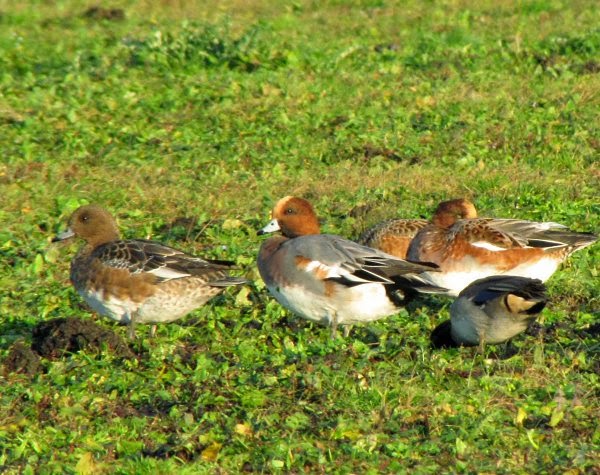 The cheery Wigeon, often overlooked but they are lovely birds with a
wonderful "surprised" call.
No comments:

I've been laid up with a nasty cold for the last few days so haven't had a chance to visit the Meadow. Today I felt a bit better and so braved the cold weather in the company of Liam Langley to see what was about. The answer was pretty much the same birds as usual. The Golden Plover flock is currently half the size that it was at its recent peak, numbering about 750 birds and today there were 3 DUNLIN keeping them company. The usual ducks are there in their usual numbers with two pairs of PINTAIL being noteworthy. The gull roost was reasonable this evening with a very high percentage of large gulls - I don't know where all the Black-headed Gulls had gone. There were at least 8 YELLOW-LEGGED GULLS in amongst them, mostly adults though with several third winters as well. 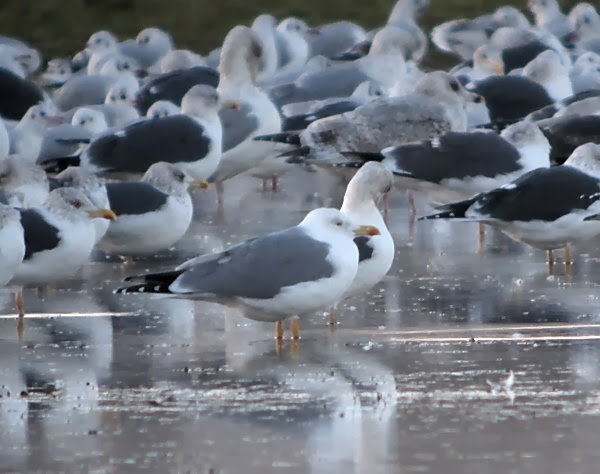 This rather petite Yellow-legged Gull is probably a female
No comments:

It's been a rather quiet few days. I've been diligently checking out the Meadow each evening though it's basically been the same birds in the same numbers since my last posting. Each evening there have been a few YELLOW-LEGGED GULLS in the roost and I'm pleased to report that large gull numbers are continuing to increase and that we're now basically up to full strength in terms of numbers. The Golden Plover flock still numbers well in excess of one thousand birds and a very impressive sight they make when they all take to the air at once.


Tonight there was finally a little bit of variety when Andy Last paid a visit to the site. He managed to turn up a smart adult MEDITERRANEAN GULL in amongst the Black-headed Gulls though unfortunately a couple of people chose to take a walk right along the west shoreline and managed to put up all the gulls so it had gone by the time I'd arrived. Andy also reported four PINTAIL (two drakes) and an adult YELLOW-LEGGED GULL and there were a couple of REDSHANK knocking about as well. 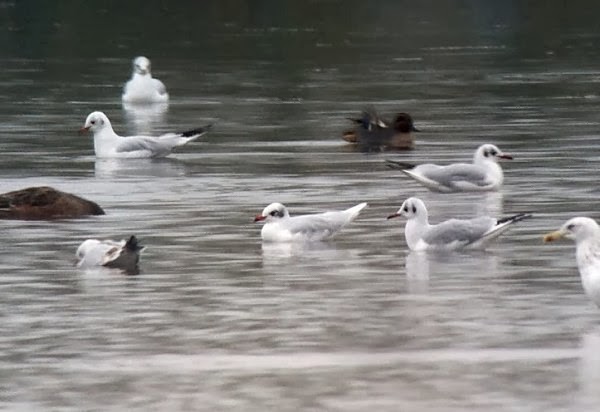 I wasn't able to get out for "last orders" on the Meadow so instead I opted for a post lunch visit. I must admit it was a pleasant change viewing the birds in bright sunshine as opposed to the usual twilight gloom. It was pretty much the usual fare: there were only 2 DUNLIN instead of the impressive 25 from Monday, the Golden Plover flock is still somewhere between 1 and 2 thousand birds, sadly still with no American interlopers, there are good numbers of the usual duck about and a sprinkling of Lapwings. All in all a very pleasant winter birding scene though with nothing rare to add that extra frisson.

Liam Langley managed to add an adult YELLOW-LEGGED GULL and 3 PINTAIL to the tally in an evening visit. 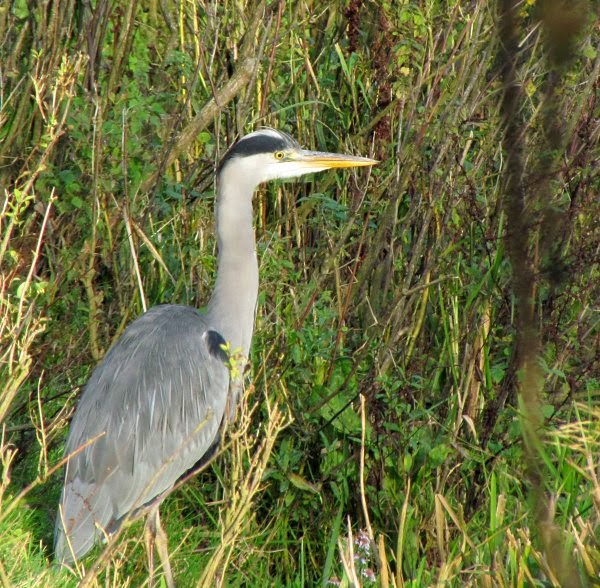 Walking back along the Castle Mill Stream I came across this heron. I didn't think that I'd be able to get very close before he flew ... 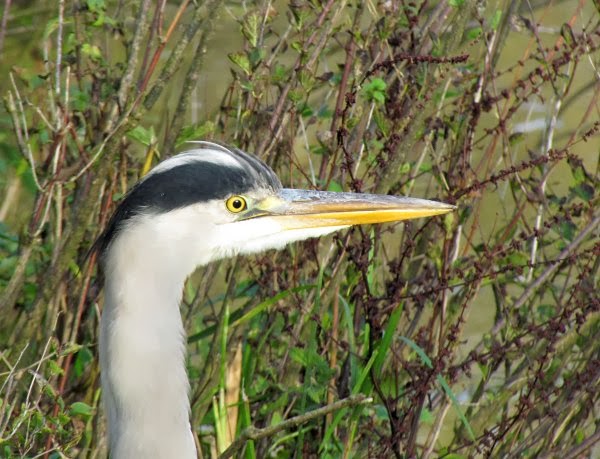 ...but in the end he allowed me to get within five yards without flying off.
No comments:

The Meadow really is getting into its stride now and is in fact now on top winter birding form. The continuing rain has increased the floods still further and it is now heaving with birds again. The Golden Plover flock is at least 1500 strong and today there were about 25 DUNLIN in amongst them - a very large count by Oxon standards. Duck numbers are very good with now about a dozen Shoveler as well several hundred Wigeon and Teal. The gull roosts are now finally pulling in reasonable numbers of large gulls. On Saturday there were three YELLOW-LEGGED GULLS though some walkers managed to put up the entire flock rather early on. 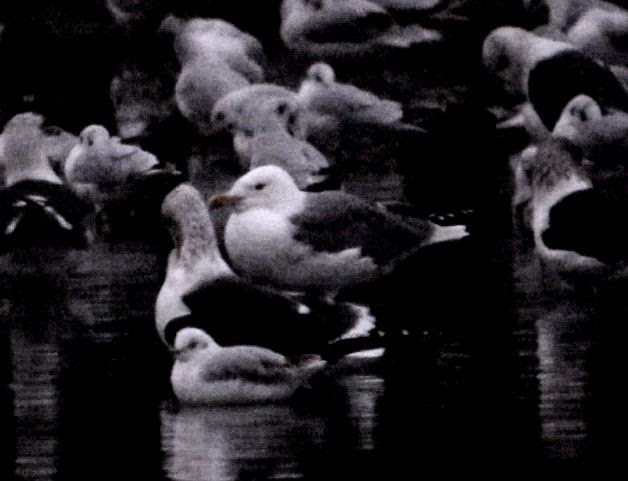 This evening, this gull caught my eye though as you can see from the above grab it was nearly completely dark by the time I found it so videoing it was not much use. I decided to try a still photo instead and with the ISO cranked up to 3200 and the exposure up 3 notches I managed to get the following shot with a shutter speed of 0.8 secs!!! Fortunately the bird was standing very still. 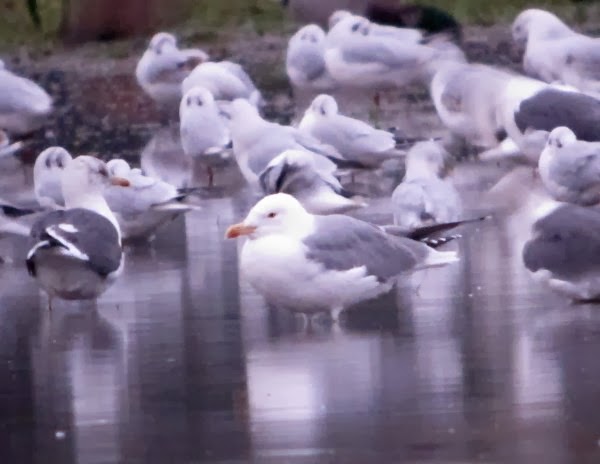 I'm amazed at how well it turned out. You can even see the large white mirror and the small white tip on the P10 primary underside that marks this out as an adult Yellow-legged Gull.

There are a few Caspian Gulls now knocking about the county with an adult roosting at Farmoor tonight so one could easily turn up on the Meadow. Finger's crossed!
No comments:

Much more settled weather this afternoon on the Meadow. There was a bit of interest on the wader front in the form of a REDSHANK along the North Channel - the first I've seen this autumn though Steve Lavington reported one last weekend. The Golden Plover were absent apart from a flock of about 100 circling high over head though a passing dog walker did report that the huge flock from yesterday was still about first thing this morning. The gull roost was still relatively modest, at least as far as large gulls was concerned though once again there was an adult YELLOW-LEGGED GULL in amongst them. There was also an interesting Herring Gull which had pure white primaries, at least on one side; on the other side the outer ones were white but the inner ones were black. Liam Langley also reported fly-over a TUFTED DUCK - not such a  common bird for the Patch. 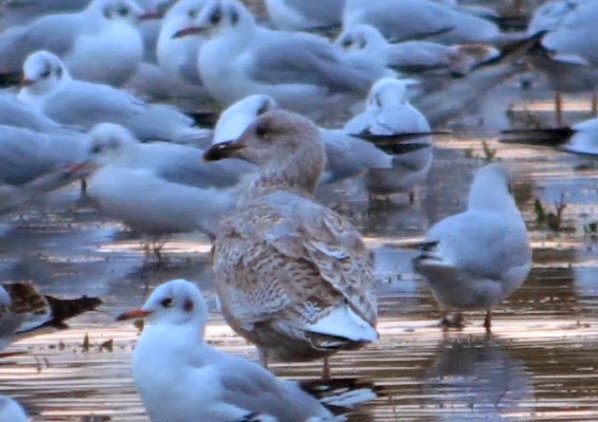 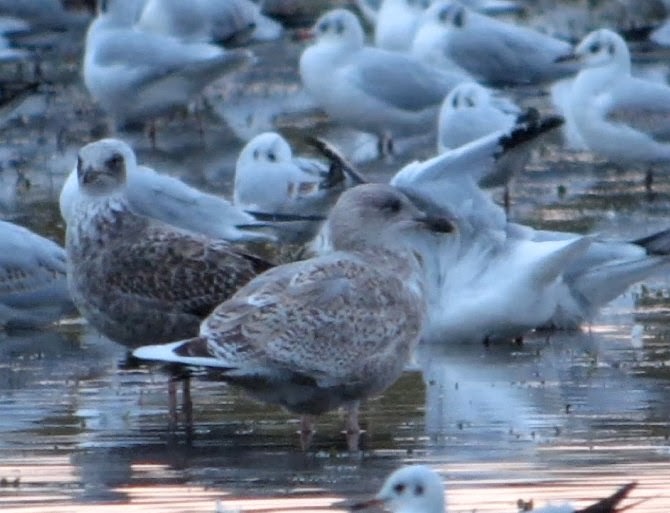 ...whereas the inner two are black on the right side

It was gloomy and rather breezy for my late afternoon visit to the Meadow today. When the weather is poor I always like to wonder whether some rarity has been grounded there just waiting for me to find it - though as usual I was disappointed in that respect. Whilst there was nothing rare at least the Meadow was incredibly "birdy" today. There were at least 1500 Golden Plover and it was quite a task sifting through them all especially given how poor the light was. Duck numbers were sharply up again as well with at least 500 Wigeon and a good number of Teal as well. Even the Shoveler count had gone up to about a dozen birds now. The only disappointment was the gull roost which was surprisingly moderate given the conditions though I did at least manage to find one smart adult YELLOW-LEGGED GULL, a different individual from last night's bird. The tertial white-tipped 1w Lesser Black-backed gull was back for the third night as well.
No comments:

The Meadow is taking on more of its winter mantle as each day progresses. Thanks to the continuing rainy weather the floods are increasing in size though they are still some way off their ideal size. The usual birds are about in increasing numbers and finally we're starting to get a proper gull roost again. There have even been some waders to report over the last week with Steve Lavington finding a REDSHANK over the weekend and today there was a single winter-plumage DUNLIN in amongst the Golden Plover, the latter numbering about 500 birds today. There now are several hundred Wigeon and Teal as well as a decent smattering of Shoveler.


Today in the gull roost I managed to find about 120 large gulls, mostly Lesser Black-backed though with a few Herring Gulls and the first YELLOW-LEGGED GULL of the season in the form of a distinctive adult with a deformed upper bill. 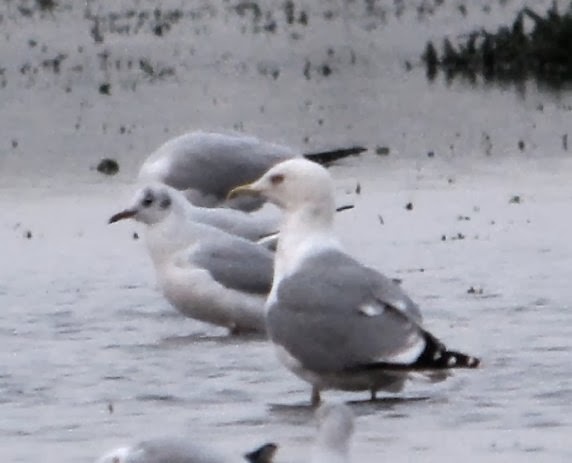 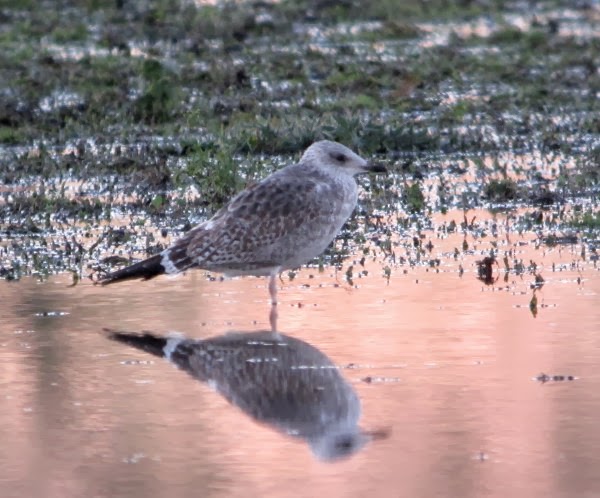 This distinctive 1w Lesser Black-backed Gull with unusual thick white tips to the tertials has been present for the last couple of nights in the roost. The length of its primary projection lead me to wonder whether it might be a candidate "Baltic Gull" (l. f. fuscus) but according to Ian Lewington they're almost impossible to ID in the field at this age unless they happen to be ringed.


I heard the Medley Farm NUTHATCH piping away this week as well - it's nice to know that it's still around.
No comments: