There have been a couple of new year ticks to report since my last post. Given the on-going lack of water, things like this are going to be thin on the ground and so should be much celebrated. The first was a WHINCHAT which was first found by Nick Boyd up in the Wolvercote allotments but was also reported a couple of days later at the same place by Derek Evans. I went up the next day to try and see it but in very windy conditions (during storm Ali) I couldn't see it. Still it's very nice to get this delightful Chat on the Meadow year list/ Although it's a no uncommon species which is seen annually at places like Otmoor, it's been a few years since the last one here on the Meadow. Incidentally, both Nick and Derek reported good numbers (30+) of YELLOW WAGTAILS in amongst the cattle up at the Wolvercote end. This is good news as this year I'd not seen more than ten down at the southern end - a worryingly low count compared to previous years.

The second new tick was a RING-NECKED PARAKEET which flew south calling along Kingston Road early one morning this week. This charismatic species breeds in good numbers in and around the London parks and gardens and has a toe-hold in the county over in Henley. In past years single birds have been seen in and around the Meadow but it's been a few years since the last one. Over time the population might spread further along the river from Henley but they seem to be taking their time over it. Incidentally, this is probably the same bird that was seen a couple of days earlier flying over Headington Hill.

Apart from that there's not been a great deal to report. A few Migrant Hawkers are still down by the Castle Mill Stream though this spell of more autumnal weather might soon put paid to them. On the Meadow itself there have been a few loitering Lapwings, as yet just modest Linnet numbers and the occasional Meadow Pipit.

So we're well and truly into autumn now and with the change of weather to stronger more westerly winds, the Indian Summer part seems to be over as well. Not much has changed on the bird front with YELLOW WAGTAILS the main point of interest in amongst the cattle though there have been a couple of Lapwing which have been offering close views in the livestock as well. The Tit flocks have formed now: it's always great to watch one of these mixed flocks of small birds pass along the hedgerows and you never know if there might be something of more interest tagging along with them.

One of the highlights since my last posting has been the finding of a WHEATEAR (a year tick) on the patch. This species certainly passes through the area on both the spring and autumn passage but it's just a question as to whether anyone happens to spot it. Nicola Devine, who's photos have often been gracing this blog of late, spotted the photo below by fellow photographer Tony Steele. I'd not come across Tony before but his amazing shots (especially his macro work) from Burgess Field speak for themselves and his flickr album (see here) is well worth a visit


Apart from that it's been mainly insects that have been the point of interest. There are quite a few Migrant Hawkers along the Castle Mill Stream along with a few Common and Ruddy Darters and over in the Trap Grounds, Nicola Devine reports more of the same. Thanks to Nicola, recently I finally managed to see one of the BROWN HAIRSTREAKS that have been around in this gem of a reserve. As the trees are rather low it offers a great opportunity to get good views of what is often a rather elusive species that is only seen high up in trees. As a point of interest, Nicola also spotted the RED-TIPPED CLEARWING again on the Wild Marjoram in the Trap Grounds Meadow. 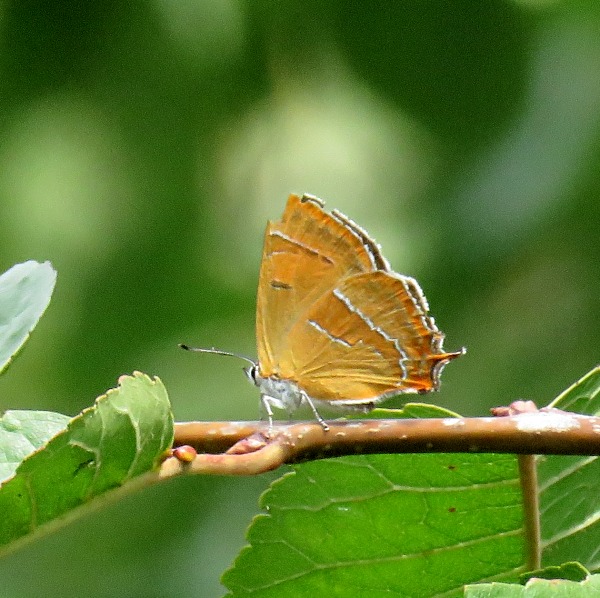 So, going forward, what can we look forward to? Until the flood waters return it's going to be slim pickings I'm afraid though we may get something like a Redstart, Wheatear, Stonechat or Whinchat passing through in somewhere like Burgess Field or along the river if we're lucky. I'm also still hoping for a Hobby on the way south as well. With the huge influx of Wrynecks across the country dare we dream of one on the Patch again? One can but hope!