I went down to the Meadow for "last orders" today and was rewarded with a vast array of birds. The floods have increased in size since my last visit and the river is now threatening to breach the banks with long fingers of flood water already stretching out along the lower lying areas towards the floods themselves. Sadly the weather didn't co-operate and it started pouring with rain and it soon got too dark to see. I reckon that I only got to view less than 50% of the birds there during my visit which just shows how many there were.


On to specifics: there were two RUFF visible along the shore though the other seven may have been hiding somewhere. 5 SHELDUCK were on show and there was an excellent count of 17 GOOSANDER today, equally the large count that we had a few weeks ago. In amongst the vast gull roost were at least 5 adult YELLOW-LEGGED GULLS though as I said I wasn't really able to do the roost full justice.

You can tell that the Meadow is going through a bit of a purple patch at present by the fact that this is the third blog posting in three nights! I went down for the evening gull roost again and was rewarded with a reasonably sized roost though sadly there was no sign of yesterday's Caspian. The 9 RUFF were back again - had I simply missed them yesterday or had they gone somewhere else to roost? 10 GOOSANDER came in to roost (9 males and 1 female) which was a good count. The most interesting sighting was a 1w drake GOLDENEYE which I found in amongst the Teal. This is a real Patch mega and quite possibly the first record for the floods as well as a very welcome Patch year tick.

Also this evening Steve Goodard managed to find a BARN OWL in Burgess Field at dusk - another Patch year tick no less! Talking of which, I met Meadow veteran Matthew Foster today for the first time in quite a while. He quietly works away at his birding but is very much "off-grid" so I only get to hear about what he's seen when I bump into him. He reported a female STONECHAT in Burgess Field about a month or so ago - this is yet another Patch year tick for what has sadly become all too rare a species on the Meadow. So that's three year ticks to add to the total today - it's quite a last-gasp renaissance!
No comments:

The Meadow is actually producing some interesting birding at the moment. After the long monotonous spell with very little happening there's been a good bit of variety over the last few days. Partly this is due to the gull roost which has improved with reasonable numbers of large gulls coming in to roost and also now that the floods are quite large there's not so much chance of them all being scared off too easily by a dog or over-zealous walker.


Sadly there was no sign of the Ruff this afternoon but this was more than made up for by finding a splendid 2nd winter CASPIAN GULL in amongst the throng - the first of this autmn/winter though not a year tick as we had a few at the start of the year. Always a treat to find, this individual really jumped out at me as I was scanning the flock at last light.

Apart from that there were just 5 GOOSANDER today (4 males and one red-head). There are good numbers of Wigeon and Teal about and I keep forgetting to mention that the SHOVELER are now back on the floods as well, albeit in modest numbers at present. The only winter species which I would expect at this time but which I'm not seeing in numbers is Golden Plover: there was just a single individual on the floods when I arrived and two more came in to land whilst I was there.

Some video of the bird - be warned you may wish to turn down the volume as it's rather windy
No comments:

I hope that everyone's Christmas was all that you were hoping for. In order to clear my head I made it out today in the insanely mild weather to the Meadow. Pick of the birds was a very welcome flock of 9 RUFF. This is no less than a year tick for the Patch list - the fact that we haven't seen a Ruff until December sadly indicative of the poor season that we've had for waders. Also of note were amongst the large number of birds were a couple of EGYPTIAN GEESE and three SHELDUCK. The gull roost was relatively modest in size though there were reasonable numbers of big gulls with one adult YELLOW-LEGGED GULL as a reward for my efforts. By the time I left there were 3 GOOSANDER on the floods though I suspect that more would have come in as it got darker.

I must confess that I'd not been down to the Meadow for quite a few days so today I forced myself to pay a visit at dusk to see what was going on. The flood waters had increased a bit again and there were still plenty of birds about though once more there wasn't a great deal of variety. Good numbers of Wigeon and Teal and a reasonable gull roost today with a couple of adult YELLOW-LEGGED GULLS the highlight. There were just five GOOSANDER today (four males and one red-head) though Mary MacDougall reported a stonking 17 the previous day at last light. Disappointingly there weren't any Golden Plover to be seen and all the Geese were right up at the top end of the Meadow so I couldn't really look through them. Sadly the recent Barnacle Geese were just one day wonders.

Finally I'd like to wish all readers of this blog a very Happy Christmas. I'll be posting the end of year review in a few days.
No comments:

I'm pleased to report that there's finally been a bit of a change to the bird life on the floods. Firstly the floods have grown again in size thanks to the continued wet weather and the number of birds has increased A LOT. There must be several thousand birds on the floods now, with getting on for a thousand Wigeon alone, several hundred Teal and at least one hundred Mallards. Lapwings are now about 50 in number and there have been more regular sightings of Golden Plover though no large flocks as yet. GOOSANDER are now coming in to roost regularly each evening though as yet the counts are still in single figures. We even had some waders recently with a single REDSHANK a couple of days ago and five of this species yesterday though there was no sign of them today. Starling numbers are noticeably up though the Linnets seem to have reduced in numbers - it may be too wet for them now. The gull roost has sadly been rather patchy so far with no really large counts. A few nights ago I had an adult YELLOW-LEGGED GULL and a possible 2nd winter Caspian - it was either that or another Yellow-legged though sadly it took off before I could get a good look at it or any photos. 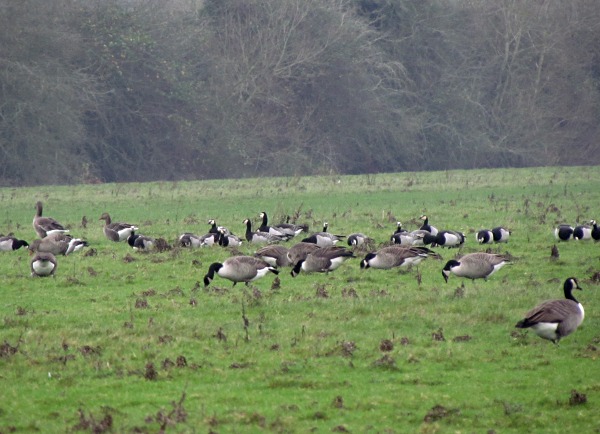 The highlight of the last few days was today when a flock of 50+ BARNACLE GEESE were discovered in amongst the vast number (far more than usual) of Geese that are currently enjoying the soggy grass in the Hinterland area. These are almost certainly the usual feral Home Counties birds that we have visit us periodically though as official BOU Category C birds they're county-list tickable 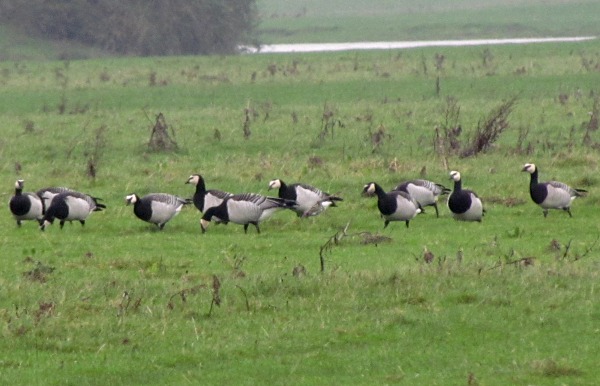 The bird life on the Meadow has been remarkably unchanging over the last few weeks, no doubt due chiefly to the relatively stable mild weather. Wigeon and Teal numbers have been fairly constant, Lapwing counts haven't really changed and there still have been only very occasional sightings of the Golden Plover. On the grassy area near the floods it's just been the usual Pied Wagtails, Meadow Pipits and Linnets with the occasional SKY LARK to spice things up. I did spot a PEREGRINE making a fruitless pass over the various assembled birds on the floods a couple of weeks back and the RED KITES have been seen most days. SISKINS are seen (or at least heard) down near the canal regularly though I've not heard any Redpoll for a while. One of the current highlights is the regular sightings of a KINGFISHER down by the moored boats or along the Castle Mill Stream. As the river becomes more flooded they find it harder to fish and so have to move to the relative sheltered backwaters in amongst the boats. 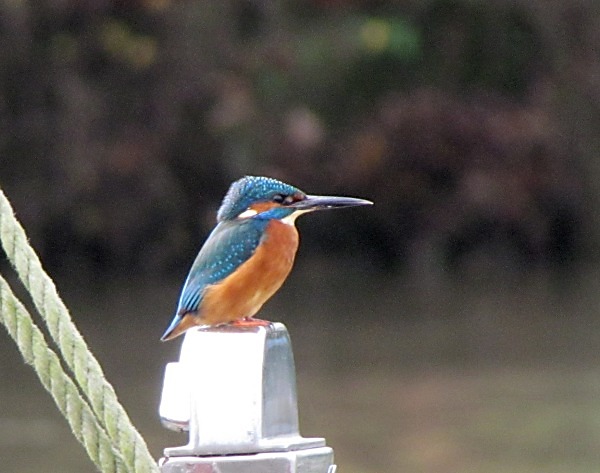 It turns out that my Migrant Hawker dragonfly sighting last month was one of the latest records ever in the county. It's not altogether surprising, given how mild it is. Sadly I can only approximately remember the date which is rather frustrating but still its a nice record.
No comments: