With little rain to speak of there's been no last minute reprieve as far as the floods are concerned and this has left rather slim pickings on the bird front with little to report. The first SWIFTS arrived shortly after my last post and I was lucky enough to hear a male LESSER WHITETHROAT singing away along the Thames about 150 yards south of Weir Cottage. In addition a couple of COMMON SANDPIPERS were reported by Matthew Lloyd along the river shoreline north of the Perch. They can often be found along there at the right time of year when there are no flood waters left. Apart from that it's very much the usual suspects in the usual places. Burgess Field is bursting with Whitethroats, there are lots of Blackcaps about everywhere and the Trap Grounds reed bed is full of Reed Warblers but it's amazing how quickly one gets a bit blazé about these summer visitors.

There have been no reports of any Grasshopper or Sedge Warblers on the patch area so far. It's very sad that just within the last ten years or so we've lost two species which used to be guaranteed sighting each year. We've also yet to have any records of Cuckoo or Hobby though there's still time, especially for the latter which can occasionally be spotted flying over our air space at any time during the summer.


Now that we are moving towards summer it's time to turn our attention to insects and flowers. The first HAIRY HAWKERS have been seen in the Trap Grounds and we've also had the first LARGE RED DAMSELFLIES there as well. The Cow Parsley and May Flower are both out now and the hedgerows are full of their heady scent. It's a beautiful time of year!

In my last post I was enthusing about what birds we might expect over the coming weeks. In the event the weather rather spoilt our plans with the spell of unusually hot weather effectively drying up the floods completely. It's a shame as things were shaping up nicely with waders of various species dropping in on the ever decreasing pools and there were plenty of RINGED PLOVERS, LITTLE RINGED PLOVERS, REDSHANK and the omnipresent OYSTERCATCHERS to be seen. A few SHELDUCK stayed on as the waters dried up, picking their way over the mud for things to eat.


With the waters having disappeared right at the peak time for the spring passage of late April/early May I was thinking that that was that and gave up on the flood area, instead turning my attention to Warblers in Burgess Field. However, Thomas Miller persevered and was rewarded for his efforts when on May Day afternoon he turned up a smart male GREY-HEADED WAGTAIL picking its way over the dried up flood area in the company of a few YELLOW WAGTAILS. 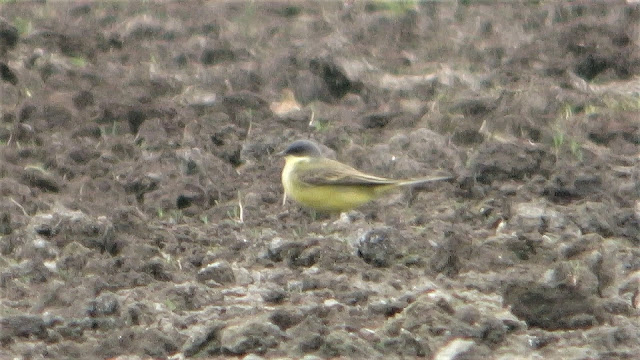 For those of you who aren't familiar with the Yellow Wagtail complex, Yellow Wagtails have a number of subspecies across the continent with Grey-headed being the variation that is found in Scandinavia. Just a few records turn up each year in this country so it's quite a rarity on our shores. If you're interested I wrote up on this subject in more detail here. Sadly the bird wasn't seen the next day though it may still turn up again.


There were a couple of other snippets of news to report. Firstly an OSPREY was seen flying up the river at 2 pm the next day by Nick Boyd. He described it as "briefly hovering over the river then circling over the drying floodplain before drifting off eastwards" - that must have been a great sight to have seen.


Secondly and much rarer, Dave from Kennington saw and heard a male WOOD WARBLER for several minutes in the copse at the far north east end of Burgess Field (so to the north of the Snipe Field). There are usually one or two Wood Warblers records each year in the spring in Oxon, usually seen very briefly and by a single observer as in this case and usually therefore not twitchable. To my knowledge this is the first record for Port Meadow though I'm sure they must have passed through unnoticed on a number of occasions over the years - we were just lucky that this time someone happened to see it.

So a most welcome year tick thanks to the Wood Warbler. In terms of what we might still expect now that the flood waters have gone, we still have Swift to get and on the Warbler front there is Lesser Whitethroat, Grasshopper Warbler and Sedge Warbler still that we might expect (and perhaps another Cetti's Warbler). Cuckoo is still a possibility as is Hobby and Spotted Flycatcher. So still plenty to look out for despite the lack of flood waters. I'll leave you with a collage of Grey-headed Wagtail photos from the original finder.