It's been another quiet and floodless week on the Meadow. We've returned to some nice warm weather which of course has done nothing for the lack of water on the Meadow. Still it's meant a bit of a reprieve for the garden mothing so there is some benefit. That's not to say that there are no birds on the Meadow. In fact there's been a steady build-up of Golden Plover, Lapwings, Meadow Pipits and Linnets all taking advantage of the plentiful supply of insects on the Meadow. There have also been up to six YELLOW WAGTAILS in amongst the cattle this week. The only water bird of note has been a single LITTLE EGRET loitering on the grass and the usual loafing Black-headed Gulls. Chiffchaffs have been moving through or joining in with the roaving Tit feeding flocks.


In my garden I was lucky enough to have a HUMMINGBIRD HAWK MOTH visit my Buddleia one day this week.


Some video of the Hummingbird Hawk Moth


Talking of moths, things have certainly quietened down of late and numbers in the trap are usually below 20 and often in single figures. Still I've managed to catch a few nice autumn species including Brown-spot Pinion, Pink-barred Sallow and the lovely gold-flecked Large Ranunculus. 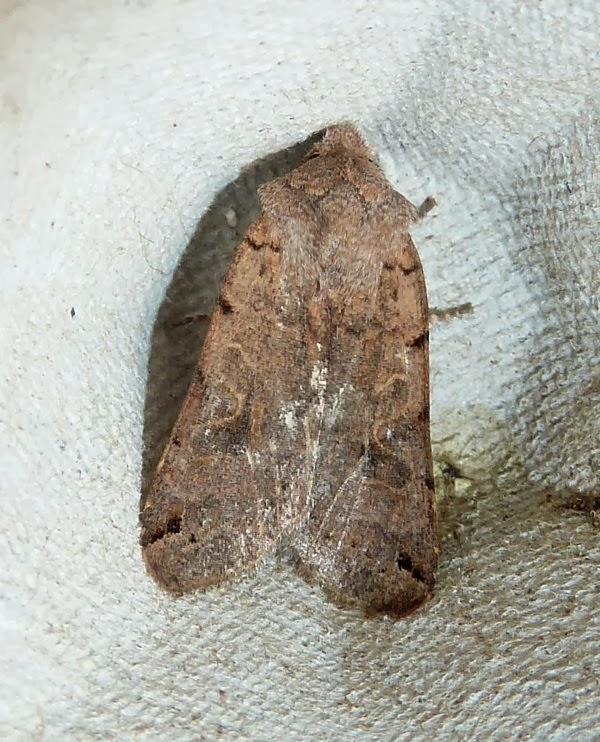 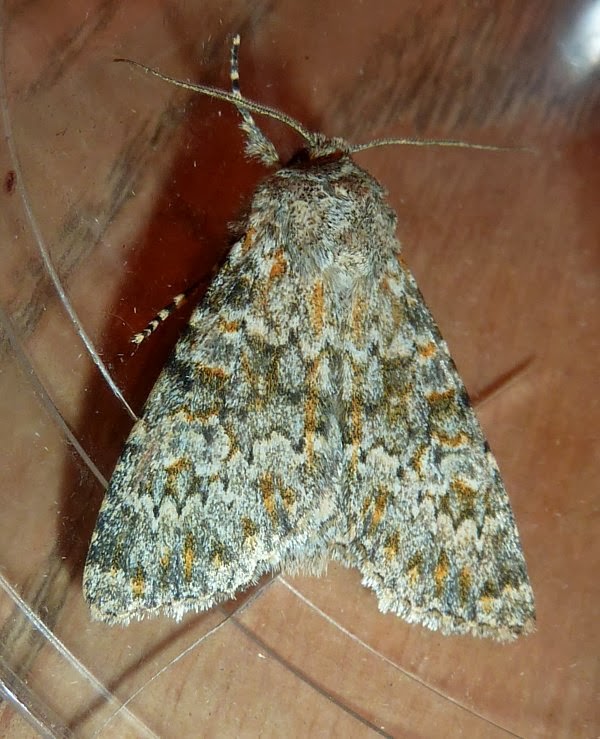 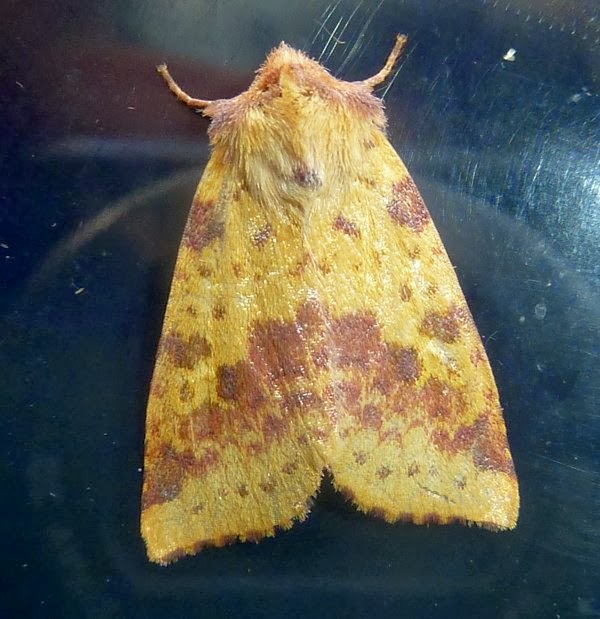 
In terms of what one can look forward to our best bet for a good bird lies with the possibility of another American Golden Plover in amongst the Plover flock. As far a passerines are concerned let's hope that some of the huge numbers of Yellow-browed Warblers that have hit the east coast this month will filter through to Oxfordshire. At the very least we might get a Spotted Flycatcher moving through the Patch. Fingers crossed!
No comments:

It's been another very quiet week on the Meadow. The main point of interest have been an increase in autumn birds with Meadow Pipits numbers noticeably up and Golden Plover now up to 75 birds, often to be seen wheeling around in the sky. There were also about half a dozen YELLOW WAGTAILS in amongst the cattle today. Lapwing are also regularly hanging out on the Meadow with up to fifty on some days. The warmer weather is offering a welcome reprieve for the summer insects after the cold snap and moth numbers in the trap are up again though for me it's been the same few species of late. The highlight of the week for me was finding a CLOUDED YELLOW in Burgess Field. 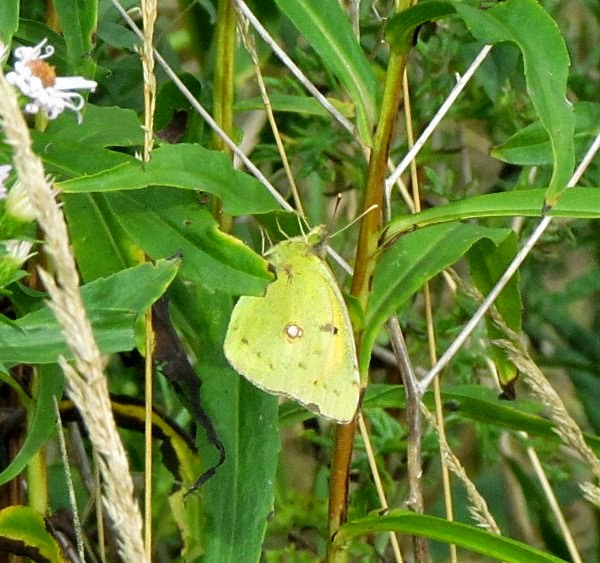 On Friday mid-afternoon I decided that I'd had enough for the week and elected to have a wander around Port Meadow to see what I could find. In contrast to my previous visit it was overcast and drizzly though with little wind to speak of. The recent rain had at least attracted a few Mallards to the area where they were rooting away in the (still dry) flood area. In amongst the feral goose flock I spotted the leucistic EGYPTIAN GOOSE - it's nice to see it again after what has been quite a while. 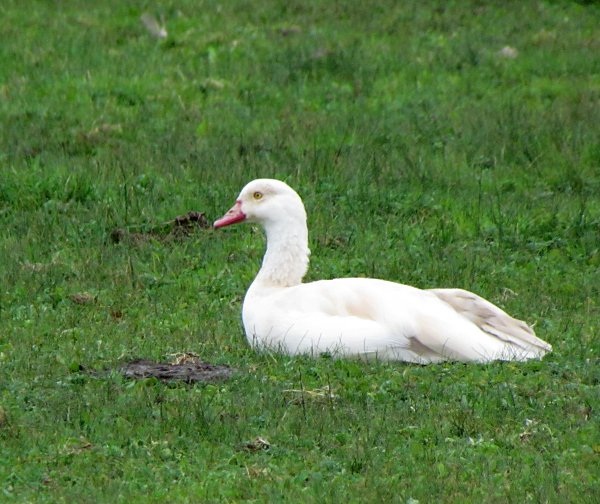 The "ghost" Egyptian Goose back on the Meadow

Down towards the Poplar trees in amongst the horses there were about 20 YELLOW WAGTAILS and along the river shoreline I managed to find a wader (now sadly a rare commodity on the Meadow), in the form of a COMMON SANDPIPER. A Little Grebe was on the river though there was not much else of note apart from a handful of Mallards, a Little Egret and a couple of Grey Herons. A Meadow Pipit was also flying about - the first of what will no doubt be quite a few as autumn progresses. Towards the boats there were large numbers of Hirundines, mostly Swallows and House Martins though I did spot at least one Sand Martin in amongst them. In the drizzle they were congregating in large numbers on the two "Swallow Trees" by the boats before suddenly getting over excited and bursting off in an explosion of wings and chatter. By the old weir a GREY WAGTAIL flew over calling - there have not been many reports of this species on the Patch this year. Along the Castle Mill Stream there was a large mixed tit flock with at least a dozen Long-tailed and a similar number of Blue and Great Tits. These flocks are always worth checking out as you can get all sorts of other species tagging along though today the best I could manage was four Chiffchaffs and a Treecreeper. 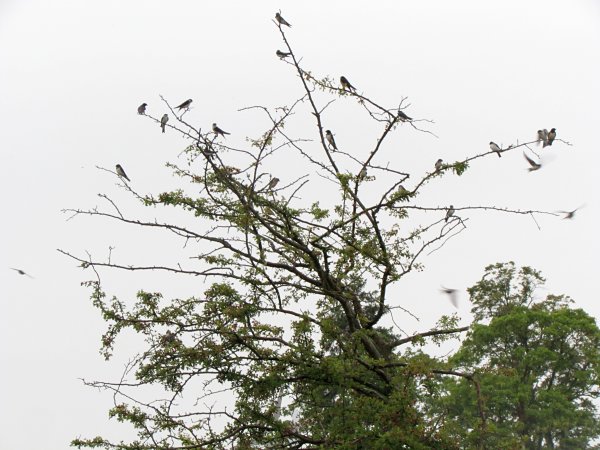 One of the"Swallow Trees" with a mix of Swallows, House Martins and two Yellow Wagtails
No comments:

The Golden Plover are back! This afternoon on a quick end of day yomp around the Meadow I found 10 of these harbingers of autumn, hunkered down in the hollows with just their heads showing. This defensive posture was because a HOBBY had shot over moments earlier and landed on the ground before a Crow chased it off. Also of note was a LITTLE EGRET (which has been around for a while now), a Grey Heron and quite a few Pied Wagtails. I also heard at least one YELLOW WAGTAIL. What with the change in the weather and the return of the Golden Plover, autumn is undeniably here. 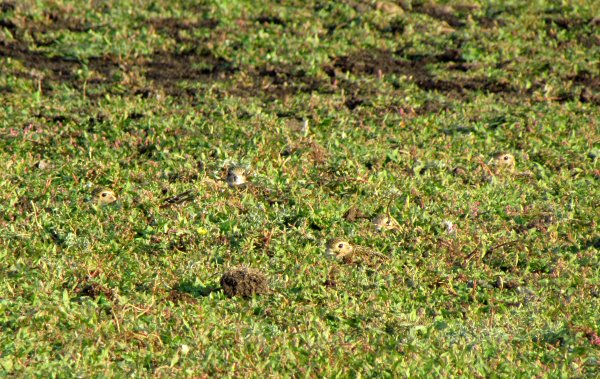 I hope that you can just make out some of the Golden Plover, hunkered down
in the cattle foot holes from this rather poor photo
No comments:

Well, I'm back from my holidays (France if you're interested - you can read up on it here). The Meadow is still as dry as a bone of course which doesn't leave much scope for variety. I've visited a few times over the last couple of weeks and the main interest is still on the Meadow where there are now YELLOW WAGTAILS to be seen regularly in amongst the Cattle. They like it here in the autumn and often seem to linger for a while - a week ago I counted about 20 of them. Now that we're well and truly into Autumn on the birding front we should be expecting some migrants to be passing through and indeed last Saturday I found a lovely WHEATEAR feeding out on the dried up flood area (where the North Channel would be). This species seems to like the dried floods and when they turn up it's often in this area. The Hirundines are gathering in large flocks ready for the push southwards - there must have been at least 100 about last weekend hawking low over the grass. There is a small flock of Black-headed Gulls that are loafing out on the grass though I imagine that there's no proper roost to speak of. 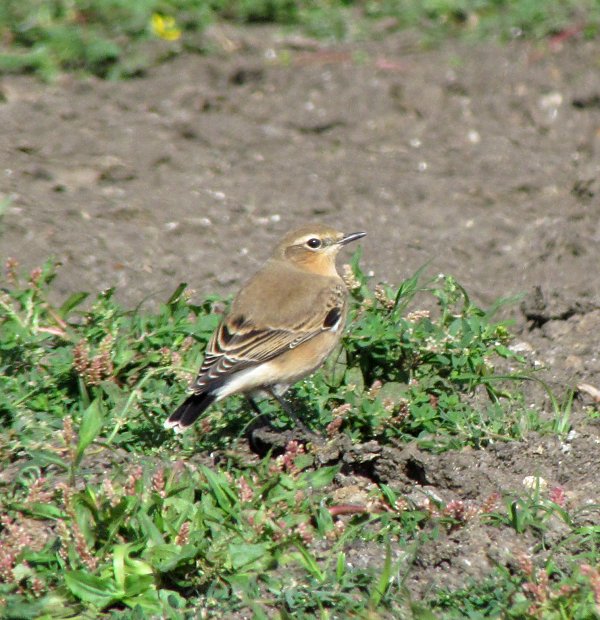 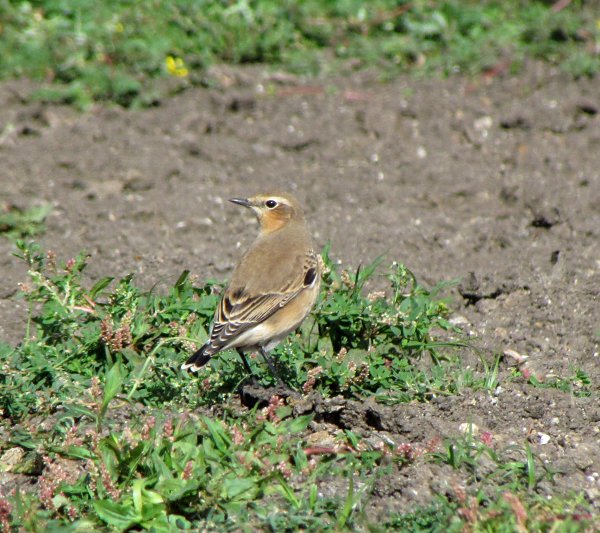 
In Burgess Field the usual warblers are about though rather skulky. This area does look great for a Wryneck or a Shrike and since we've had two of the former species in the county in the last week or so it's worth looking out for one. Along the Castle Mill Stream I've seen a Kingfisher a few times and Roly Pitts reported one as well. Roly also managed to find a COMMON REDSTART along the Thames North of the Perch recently (with a possible second bird) - a great find and until this year a very hard species to see on the Patch though we were rather spoilt in the spring by several that stayed a long time in Burgess Field. Roly also reported a GREY WAGTAIL by the Trout Inn - I've hardly seen this species at all this year though I imagine sightings are commoner up in Wolvercote. One migrants species that we've yet to see is Spotted Flycatcher - they are often seen in the hedgerows working their way southwards on the the Meadow.


The Butterflies in Burgess Field have long gone though in the Trap Grounds the wild marjoram is still attracting a few. I'm also getting quite a few on my garden Buddleia enjoying the sunshine. On the moth front both Steve Goddard in Wolvercote and myself are busy trapping away with Steve closing in on an impressive year list of 400 whilst I'm trying to get close to 250. We are now very much into late summer/early autumn moths with Yellow Underwings dominating the trap and I had my first Sallow (very much an autumn species) as well as a Red Underwing buzzing around my window last night. 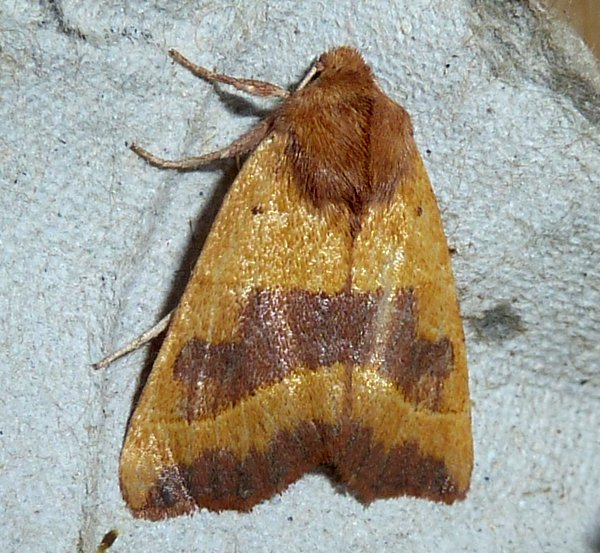