The so-called Great Storm of 2013 (see here) proved a bit of an anti-climax, at least here in Oxford but it did at least provide a nice top-up of the flood waters which are now looking not quite so anaemic. Ideally though they still need to be much bigger so that the birds aren't so easily flushable and to start attracting a decent gull roost. Nevertheless they are getting quite "birdy" now with good numbers of Wigeon and Teal and today the first few Shovelers appeared as well. Golden Plover numbers are fluctuating on a daily basis with a peak count of about 200 recently. The only gulls roosting so far are moderate numbers of Black-headed Gulls though I hope that this will change in the next few weeks. The Jericho Red Kite has been knocking around again recently - it was over my house today and was seen from the Meadow by Steve Lavington. 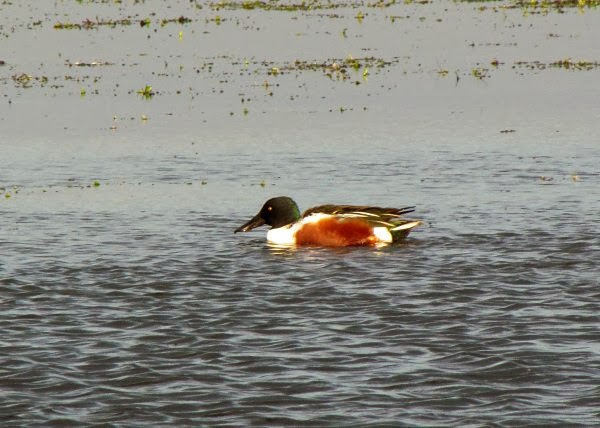 The first Shoveler of the season

So we're getting back into typical winter birding on the Meadow. As always anything can turn up but realistically perhaps the most likely good bird might be another American Golden Plover - last year's bird was found at the end of October so fingers crossed. Apart from that it's probably going to be gulls that keep us occupied over the next couple of months: November and December are the easiest months for finding Caspians as other large gulls are very streaky-headed during this period.
No comments:

After the (relative) excitement of the start of the week it's been a bit disappointing since then. Sure we now have some flood waters but after the birdy start to the week, numbers have dropped off somewhat. Most of the Wigeon have stayed away though there have been a few birds about though at present they are outnumbered by the Teal. A dozen or so Golden Plover have been hanging around as well as modest Lapwing counts. The highlight over the last few days has been a single DUNLIN (the first proper wader for some time) that has been hanging out with the Goldies.


I also forgot to mention a PEREGRINE that was flying around on Monday buzzing the assembled birds on the floods.
No comments:

The near continual rain has meant that the floods are growing on a daily basis at the moment. This was just what incoming wintering duck were looking for and on Sunday evening Steve Lavington reported about 200 Wigeon and Teal. This morning I went for a quick look and the Meadow was positively awash with birds. There were at least 200 Wigeon, a similar number of Mallard and perhaps 50 or so Teal. What with all the feral geese flocks and quite a good number of Black-headed Gulls, it was a great sight to behold after these lean times.


I went back in the evening for a proper look only to discover that the combined efforts of some dog walkers and some kids in wellies had pushed quite a few of the duck off though they were gradually coming back whilst I watched. In terms of a gull roost there were perhaps 1500 Black-headed Gulls but only two Lesser Black-backed Gulls. A small flock of about a dozen Golden Plover were flying around but didn't appear to settle. The most interesting bird was a rather strange RED-CRESTED POCHARD hybrid. Superficially looking like a female of that species I initially thought that it was the Farmoor bird popping over for a visit but whilst the head was pure RCP the body was out of proportion to its head looked much more Mallard like, including a Mallard tail. If anyone else has any thoughts on this bird then do please let me know. 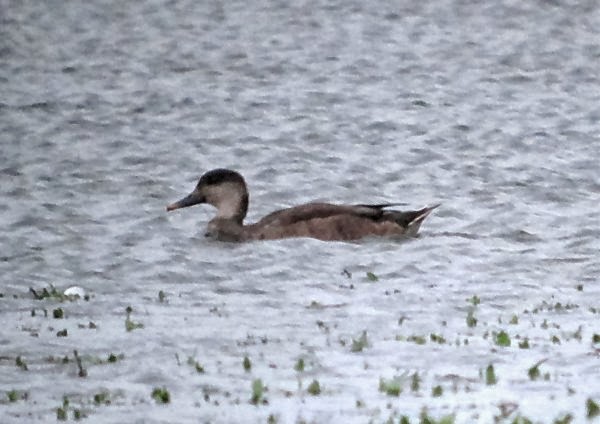 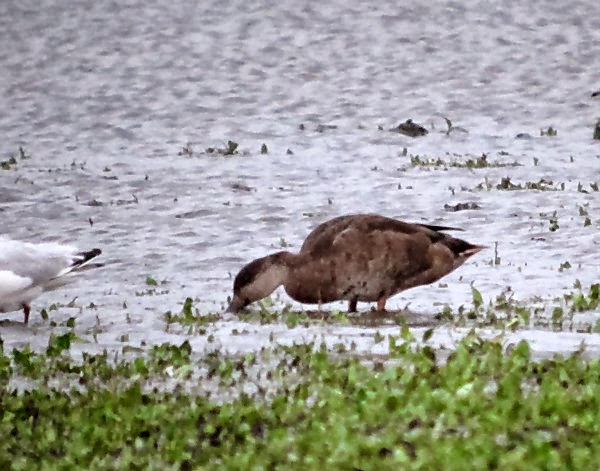 I'm pleased to report that the Meadow finally has some flood waters back on it again. Still only modest in size, nevertheless they are growing gradually thanks to the rather showery conditions of late. At present there are two pools:  one by the Aristotle Lane exit and a long thin one along the North Channel. The water is starting to attract the birds again with Golden Plover, Lapwing and Black-headed Gulls all hanging out in the vicinity. Indeed, the Meadow is even starting to get a bit "birdy" again. Golden Plover numbers have been building progressively but this morning there was a sudden leap from around 100 birds up to about 400. The Linnet flock is now about 100 birds and a few days ago I counted about 50 Meadow Pipits. The first few winter duck are starting to arrive with up to 5 Teal loitering along the Castle Mill Stream and this morning what looked liked 3 Wigeon did a flying circuit of the area before heading off.


In addition to the general background picture, there are some more specific sightings to report this week: the mixed mongrel goose flock of 4 BAR-HEADED GEESE and 6 WHITE-FRONTED GEESE were back in amongst the feral Greylags this week. Some of the White-fronts look rather hybridy and I wonder if they're not White-front/Bar-headed crosses. These are definitely not wild birds but still nice to see this group back again. 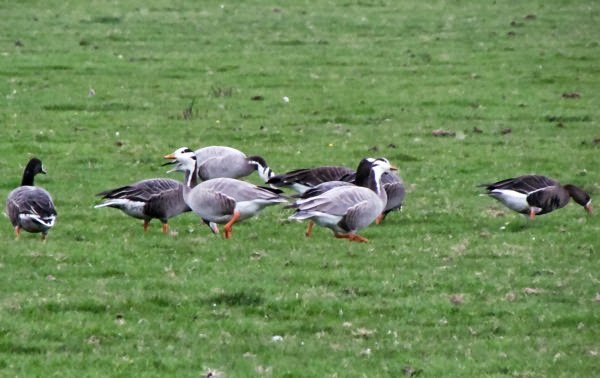 Some of the Bar-headed and White-front Geese


The highlight of the week must go to a lovely MARSH TIT that was hanging out along the Castle Mill Stream this morning near the north end in the Hawthorns. It was calling periodically and seemed to be feeding on the Hawthorn berries. Marsh Tit is not that common on the Patch and are generally reported less than annually though we have already had one this year. As this species is fairly sedentary, I imagine that the sightings that we get are first winter birds moving out from Wytham Wood to find territories of their own. There were quite a few other birds about in the same area including a Tree Creeper and I heard a Coal Tit calling across the river. 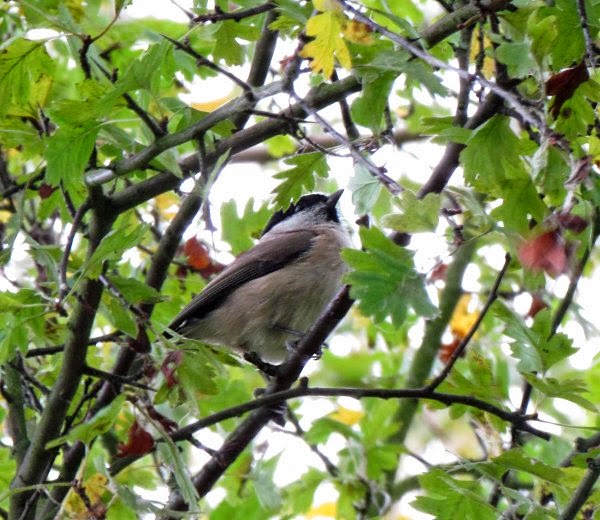 As it was very mobile, it was hard to get a shot of the Marsh Tit but eventually it
stayed still for long enough for me to get this record shot.
No comments:

Sorry for the slow update but I've been away down in Cornwall (you can see how I got on here). I meant to do an update on the YELLOW-BROWED WARBLER before I left but in the end my preparations overtook me. The star Warbler was seen again on Friday throughout the morning though at lunch time there was a sudden torrential downpour which seemed to move it on. After that it was only seen once late in the afternoon with a roving Long-tailed Tit flock by Mark Jennings and one other birder. It wasn't seen at all the next day. Interestingly enough a second Yellow-browed was reported at the Abingdon Science Park on the Friday having been found by some visiting birders on Wednesday. The following week one was seen at Radley in the evening though didn't stick around at all. So, just like the proverbial buses you wait ten years for one (the last twitchable one was in 2003) and then three turn up at once. Anyway, this wonderful bird certainly brightened up was is otherwise a very quiet and boring autumn for the Meadow. For those who want to read up more on it, I've written a finder's account on my personal blog. 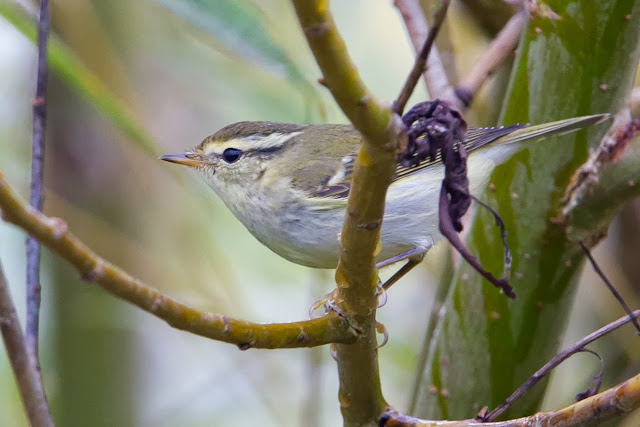 Another cracking shot of the bird (c) Roger Wyatt
No comments:

Thankfully the wonderful YELLOW-BROWED WARBLER stuck around enabling quite a few county birders to twitch it this morning . Indeed eight or so (who all bar one needed it for their county life list) were there at first light and fortunately the bird duly performed, calling frequently so that it could easily be tracked. It seemed to be fairly faithful to the pollarded Willows that line the side of the road as it leads down to the car park and would generally return there, though sometimes it would go missing for a while. The last report that I heard of was at around midday but I don't know whether anybody tried to see it later on in the day - it may well still be around. 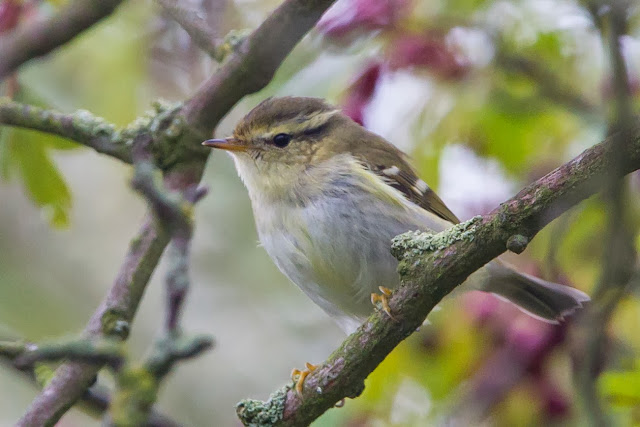 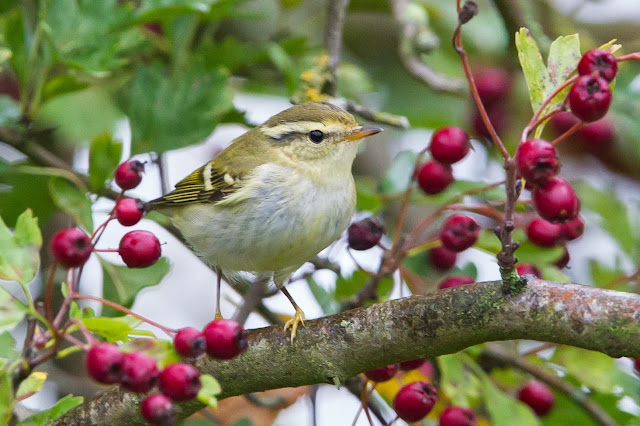 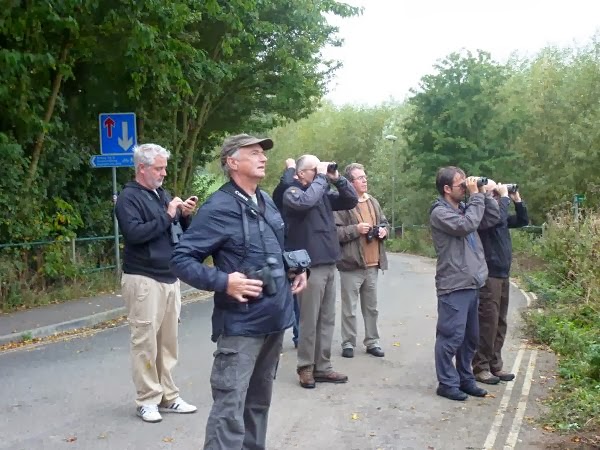 The early birds getting the warbler worm this morning.

At last something decent to report on the Meadow! I went for my usual late afternoon walk around the Meadow, more to stretch my legs rather than in any hope of finding something decent. Still the Golden Plover numbers have gone up to 120 birds, there are also about 50 Lapwings, 75 Linnets, 10+ Meadow Pipits and at least 5 YELLOW WAGTAILS.


Given the huge numbers of Yellow-browed Warblers that have been turning up along the east coast I have been scouring the trees and hedges on my walks each day, more in hope than any realistic expectation of finding one of these Siberian gems. I'd just finished my tour today and at about 5:50pm was walking up the road by the car park at the bottom of Walton Well Road when I was woken from my reverie by the unmistakable call of a YELLOW-BROWED WARBLER. I couldn't quite believe it! It flew from the trees next to the car park across the road to the Willows between the road and the Meadow. There's still lots of cover in the trees but I managed to follow it for about half an hour getting regular views as it worked its way in a circuit along these Willows, across to the trees between the car park and the Castle Mill Stream and then back into the copse of mixed trees between the car park and the road where I'd first found it. It only seemed to call when it flew from one area to the other, otherwise working silently and reasonably slowly along the trees.


I know that several keen county birders will be there tomorrow morning at first light looking for it - let's hope that it sticks around for others to enjoy. 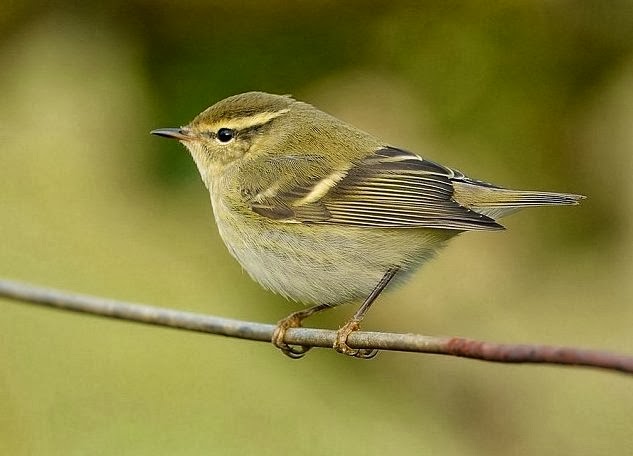 In the fading light I had no chance of a photo so here's an absolutely fantastic shot taken by Dave Perrett (c) of one in Shetland recently. I've used photos of Dave's before (of a Pallas' Warbler) - he takes some of the best birding photos that I've seen on the internet.