Autumn has definitely kicked off, at least in the birding world. This does at least mean that we have some things to report at last. The highlight was an Osprey seen and photographed flying over Wolvercote this evening by Joe Taylor. Whilst not a year tick, it's always tricky to see these wonderful birds as their stay over the Meadow air space tends to be very brief. It's a matter of happening to be in the right place at the right time in order to get a sighting.

What was a year tick was a Spotted Flycatcher that was found by Steve Lavington near the Perch though due to the number of people about, sadly it didn't linger. There was also a Hobby seen by Nick Boyd hunting near the railway line by Aristotle Lane this week. Nick also saw a couple of Yellow Wagtails in amongst the cattle on the Meadow. I would hope that this number will build as we progress through the autumn. In the past we have had a peak count of more than 20 birds on the Meadow during the autumn. A few Lapwing are starting to gather on the Meadow now - they should be joined by a few Golden Plover in due course. A couple of Egyptian Geese were reported by Andrew Siantonas along the river as well.
Apart from the above headline birds, there are lots of young birds around at the moment. Nicola Devine had a family of Grey Wagtails along the wildlife corridor near the Trap Grounds recently. I suspect that the rain-free weather has been kind to breeding efforts so there should be good numbers of young birds around.
As far as Odonata are concerned, it's still high summer. Common and Ruddy Darters are out in large numbers now and Migrant and Southern Hawkers are on the wing. The good news is that Willow Emeralds have been seen in the Trap Grounds already. Whilst August is traditionally the time when they start emerging, up until this year we've not really seen them until September so it's good to have them out in numbers at the "proper" time. Up to five have been seen already, including mating pairs. 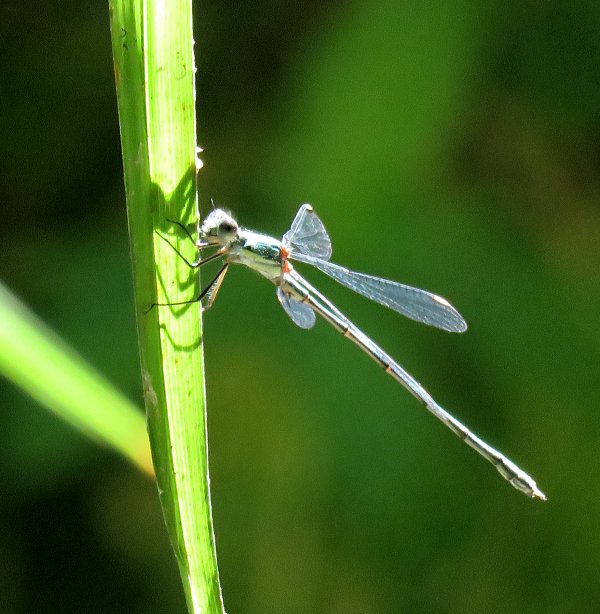 Another top find for the Trap Grounds has been a good number of Small Red-eyed Damselflies. Prior to this year, this species has only been seen once before on the Trap Grounds but suddenly we seem to have a breeding colony with at least 10 seen by Nicola Devine including ovipositing pairs. It is another of these species that is rapidly colonising new areas in the South East and is yet another resident species to add to the burgeoning Trap Grounds list!

Nicola has also managed to find a Brown Hairstreak along the wildlife corridor. Through her diligence and sharp eyes she usually manages to find this rare butterfly species each year though the rest of us usually struggle find them!

Looking ahead our Odonata should be with us for a little while yet. We should also start to get more migrant birds passing through. With Redstart, Stonechat and Whinchat not yet on our year list we should just squeak past 130 if we manage to get those.