Birding over the last couple weeks has been largely the same as January. Storms Dennis and Ciara have made birding impossible on some days, but at least the floods have been topped up again. The first oystercatcher of the year arrived on 8th February, and several ruff, dunlin and redshank have been seen with the lapwing flock, along with some large counts of golden plover. Still no black tailed godwits, however, which is something to look out for in the coming weeks. A rather uneventful WeBS count on 12th February revealed little hidden amongst the wildfowl, although I had a peak count of eight shelduck.

On the gulling front I've had a couple more Caspian gulls and a few Yellow legged gulls but not much else. On 10th February I had good views of a first winter bird that I had previously seen distantly in December and a couple times subsequently. Initially I had called it as a Caspian gull, then downgraded it to a hybrid when I saw it distantly in flight, as it had dark underwings. This was the first opportunity I had to study it up close and it proved to be a very informative bird. There are a few features on this bird that are a bit "herring-y" - dark underwings, faint streaking on the head, and a rather average looking bill.  Using the Gibbins et al 2011 trait scoring system, which aims to remove some subjectivity from Caspian gull identification, I scored this bird as 22. This is within range of a pure Caspian gull (12-25) but also in range of a hybrid Herring x Caspian (22-32) - the authors state that the upper limit for safe identification as a pure Caspian is 21. Therefore, based on this study it is impossible to say whether this individual is an ugly looking pure Caspian or a hybrid. 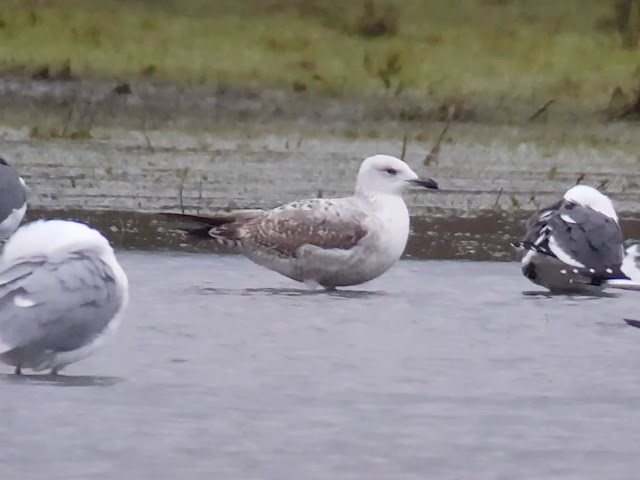 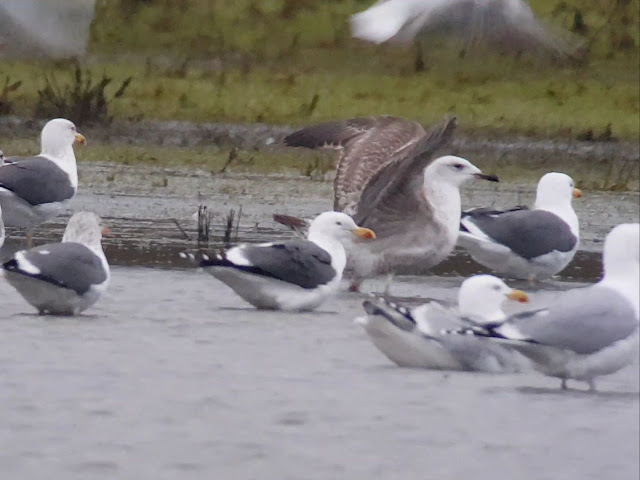 However, I decided to put some images of this bird on Twitter, and received some positive comments from London birders who have the opportunity to study large numbers of Caspian gulls up close on the Thames estuary. They see lots of birds from mixed colonies in Germany, which can often be identified from yellow X colour rings. They said that this bird would make the grade as a Caspian in the South East - interestingly, it seems that the westward expansion of Caspian gulls into Germany since the Gibbins paper was published means that more and more "not so classic" individuals are being seen in Britain. It seems silly to ignore such birds when many are just slightly "impure", with some herring genes somewhere down the line, rather than a first generation or even second generation hybrid. Based on this feedback I'm happy to count it - I've certainly seen worse hybrids on the Meadow this winter. Before long I think we will have to start recording them as "Caspian-type" gulls anyway.

On 12th February I had an exceptional count of four different Caspian gulls in the roost - an absolutely beautiful second winter bird with massive p10 mirrors, "Graham" (nice to see it back in the roost after a week's absence), the other regular first winter and the bird above. In addition there were at least five Yellow-legged gulls - one of the best roosts I have ever seen on the meadow, with huge numbers of gulls floating close in on the water in very calm conditions. Still no white wingers however which is disappointing - we can't possibility go a second year in a row without one on the Meadow! Another bird to look out for are storm-driven kittiwakes, which are a real possibility after the recent weather.