December has been unusually quiet, largely due to the Big Freeze that gripped the country over the first part of the month. It was so severe and prolonged that the Meadow became largely birdless though it did mean that my garden feeders suddenly became a much sought after source of food for the local Goldfinches and Greenfinches. They ended up in residence in the garden for the entire time - a welcome sight when everywhere else was frozen and barren. We've also had a pair of Blackcaps gracing the garden on a regular basis. This species is pretty much annual in my garden over the winter. After this frozen weather, it was back to mild and wet weather and a welcome return of the birds. Indeed the Meadow has been very "birdy" for the second half of the month with lots of the usual suspects.

Perhaps one of the highlights was a distinctly dodgy Caspian Gull which graced the roost one evening. Definitely with some mixed genes it was so marginal a call as to whether it could be classed as a Caspian or just a hybrid that even I (normally only too ready to claim a Casp when I see a candidate bird) thought it wasn't one. It was only our esteemed county recorder who said that it was "good enough" to be one. In any event it's not a year tick as we had plenty of this charismatic species at the start of the year, but it's nice to have the first of the season under our belt. There was not much else on the gull front apart from a few Yellow-legged gulls. The real gulling season kicks off properly the new year.

On the waterfowl front it's been the usual species in fairly good numbers. There are plenty of Wigeon and Teal about with a dozen or so Shoveler. On some days we've had a few Pintail gracing the floods as well. A couple of Shelduck for several days running were an unusual sight for this time of year. There are plenty of geese about with the Barnacle Goose flock more or less in permanent residence and plenty of Canada Geese. The Blenheim White-fronted Geese (sadly not tickable) have been popping into the roost on occasion as well. There have been up to 8 Goosander along the river, with some occasionally appearing on the floods at dusk. There was an intriguing "reported" Ring-necked Duck on RBA recently though with a couple of Tufted Duck on the river and nothing more know about it than this one mention I can't really in all good conscience claim this as a tick. 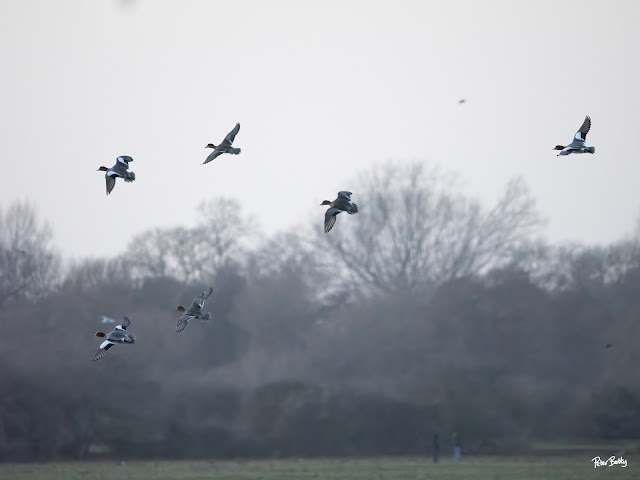 Waders have been mostly represented by Golden Plover and Lapwing in modest numbers. We have had the odd Black-tailed Godwit and Dunlin record though none that have lingered. A couple of Redshank were seen along the river in their usual place near the fallen trees towards the end of the month. During the frozen period a lot (50+) of Snipe were seen in the Hinterland where presumably the ground was less frozen.

There's not been much else to report apart from the pair of Stonechat which seemed to be wintering in the thistle area between the Aristotle Lane and Walter Well Rd exits. However, the cold spell eventually proved too much and they seem to have departed now. 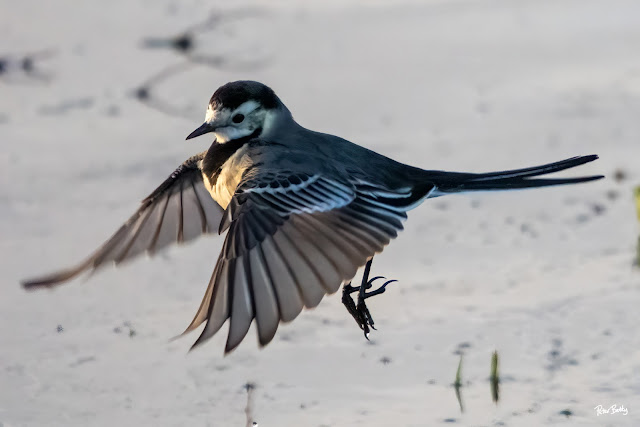 The only other piece of news is a report (in a comment of the previous blog post) of a Whooper Swan flying low over Wolvercote on the 20th November at around 11 am. This is a welcome year tick which pushes the final total to 137 strict BOU + 1 bonus bird (Red-breasted Goose). This compares very favourable to last year which was 136 + 4 (White Stork, Crane, Red-breasted Goose, Snow Goose). So in terms of strict BOU records this is a record breaking year. In any event it's a great effort given how quickly the floods disappeared during the crucial spring passage period.

Finally it only remains for me to wish all blog readers a very Happy New Year. My thanks go out to the great team of patch birders that Port Meadow has. It's been great birding the patch with you all this year and our year list total is a real team effort. Here's to another great year for 2023!

PS As usual I will post the end of year review sometime next month.