I wasn't able to get down to the Meadow on the previous days so I took the opportunity this afternoon even though Sundays are not usually that great due to the increased number of people and dogs around. The heavy rain that we had recently had increased the flood level nicely and there was a rather nice Turner-esque sunset which was enjoyed by about half a dozen birders who came and went by the Burgess Field gate. The golden plover were still there, numbering about 60 though apparently a large number had flown off earlier on. Duck numbers were down somewhat as well and I guess that a dog had probably gone through there earlier in the day and had chased them off. The two REDSHANK were still about seeming very much at home. The gull roost this evening was rather small and rather distant with a couple of common gulls (one first winter and one adult) the pick of the bunch. 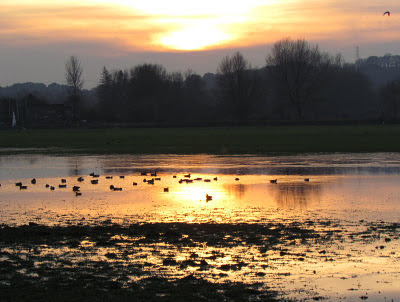