The weather was pretty foul this afternoon when I went out to visit the Meadow. I often feel more optimistic in poor weather and indeed the gull roost was better than it had been for some time particularly with regards to large gulls which were present in very large numbers tonight. Despite this plethora of birds to look through I couldn't actually turn up anything unusual and it was just the default gulls tonight. There was one possible yellow-legged gull that flew off before I could even get my scope on it. The golden plover were well represented tonight as well and there were plenty of the usual winter ducks. All in all it was pretty packed out with birds but viewing conditions were so difficult with the rain and the wind that it was hard to do justice to the good bird numbers. 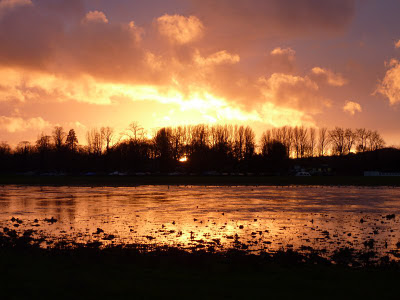 For a few brief minutes there was a spectacular
sunset - worth braving the wind and the rain for!