Today continued the trend of the week with progressively nicer weather and regrettably a progressively smaller gull roost. Many of the gulls that were present were frightened off by a couple of rampant dogs and sped off to the safety of the Farmoor roost so there were only a handful of larger gulls about and the juvenile common gull to keep the ubiquitous black-headed gulls company. The two REDSHANK were still around as were the flock of about 150 golden plover. Duck numbers have increased and there were about half a dozen shoveler tonight. Yesterday evening I finally heard my first redwing of the season go over and today whilst scanning the floods a fieldfare was "chakking" away behind me in the Trap Ground border hedge. 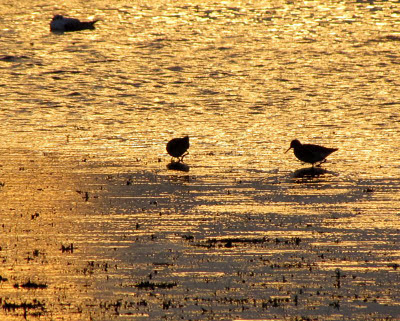 Something a bit arty this evening: the two
redshank shot directly into the reflected sunset.