As I had a dentist's appointment later on today during what would be my usual visiting time, I decided on a late morning run around the patch for a change. This turned out to be most fortuitous as I jammed in on five AVOCETS there which had been found by Cherry Robertson this morning. They weren't actually present when I arrived but flew back whilst I was watching. They remained rather flighty and would occasionally take off, fly several circuits around the Meadow before settling again. Apparently at 1 p.m. they were flushed and flew off high to the south (per Jason Coppock) 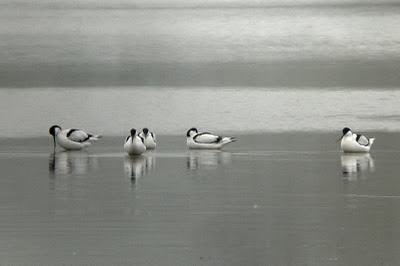 The five avocets
I only had my point & shoot camera with me as I was on a run but fortunately Phil Chapman let me take a few digiscoped shots through his scope and this one turned out ok (thanks Phil!). I left Duncan Eames trying to take some DSLR photos. 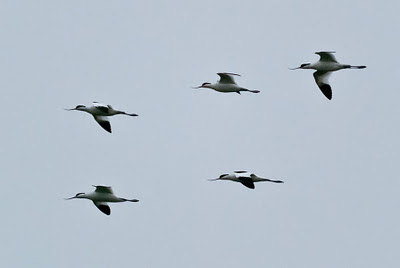 Duncan Eames (c) managed this flight shot of the birds
Cherry had clearly had a good visit as she also had a fly-over RAVEN on Burgess Field as well as the first PINTAIL of the season, a drake, which was asleep opposite the Burgess Field gate in amongst the other ducks. The floods seemed to have widened even since yesterday though there had been no overnight rain so clearly the water is coming up from below. Duck numbers were up nicely with shoveler numbers up to more typical levels now. There was a good flock of several hundred golden plover and a single REDSHANK. To round it off there were several (at least three) SNIPE tucked up in various locations around the fringes of the floods. All in all the Meadow is looking really birdy now - it's great to have it back!